Myth: All the Trash in the Ocean Is Plastic 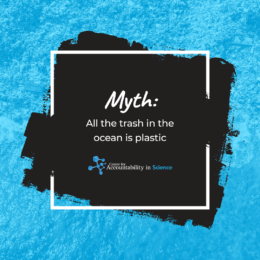 There is plastic trash in the ocean, but it is certainly not the only trash that finds its way into the sea. As much as 40 percent of the trash in the ocean is something other than plastic: glass, aluminum, cigarettes, or other items that were improperly disposed of.

Of the plastic in the ocean, not all of it is small, single-use items either. In fact, the Great Pacific Garbage Patch — a floating mass of trash near Hawaii — consists predominantly of abandoned fishing gear rather than the small items we typically think of as trash.