Myth: Alternatives to Plastic Straws Are Better for the Environment 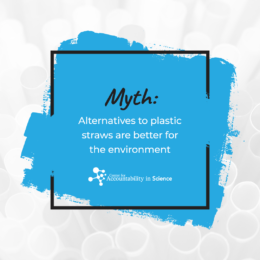 Much of the debate over plastic straws is based on a faulty study conducted by a 9-year-old student who (incorrectly) estimated that 500 million plastic straws were used per day. Despite this faulty study, many restaurants — and some local governments — have eliminated the use of plastic straws.

But the alternatives are not necessarily better for the planet. Reusable metal straws, for example, need to be used 150 times to break even with the emissions generated by producing a plastic straw. Other straw alternatives use even more plastic than the straw. Starbucks’s strawless lid used significantly more plastic than the flimsy straw and lid combo used previously.