Myth: Nuclear Power Is Bad for the Environment 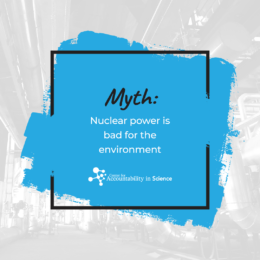 Nuclear energy generation is carbon neutral while also having enough power to run entire cities. The other fuel sources powerful enough to run cities today are fossil fuels like natural gas or coal — both of which release carbon into the atmosphere.

There are other carbon-neutral energy sources, but none of them are efficient enough to power cities. Solar and wind power are highly inefficient and often cannot meet peak demand for a single home, let alone a city. Hydropower is much more efficient than other alternatives, but it is constrained to certain regions where rivers are accessible. It can’t work everywhere. Nuclear power is clean, efficient, and the only practical existing alternative to fossil fuels.