Myth: Plant-Based Fake Meat Is Better for the Environment Than Real Meat 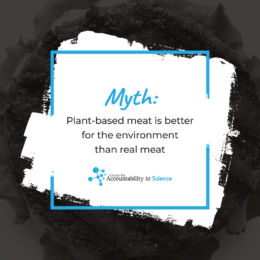 With a title like “plant-based,” it’s easy to assume a product is good for the environment. But that’s not always the case. Synthetic meat is a prime example. The production of “plant-based” meats creates five times more emissions than just eating the raw legumes and vegetables in some of the patties. Plant-based patty production also creates roughly the same amount of emissions as the production of real chicken.

Lab-grown meat is even worse. Cell-based meat production generates five times the emissions of real chicken and roughly the same emissions as real beef. But either way, consumers probably shouldn’t put too much weight on the carbon emissions of their food. Every American could go vegan overnight and it would only lower U.S. emissions by 2.6 percent.