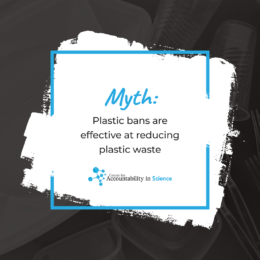 One would think that banning plastic would guarantee less plastic waste, right? That’s not actually the case. Studies have shown that plastic bans are sometimes ineffective and can even make some problems worse.

One such study, conducted by researchers from the Australian National University, found that a ban on plastic bags resulted in the use of larger, thicker plastic bags. It also did not affect the total amount of plastic bag litter in the area. Another study from the University of Sydney found that a bag ban resulted in the consumption of 12 million more pounds of plastic garbage bags, which were not banned. The study’s author noted that the increase in trash bags was likely due in part to the inability to reuse plastic shopping bags for smaller trash bins or litter boxes.

As with anything, the full effect of plastic bans must be considered to ensure the intended consequences do not make the problem worse.