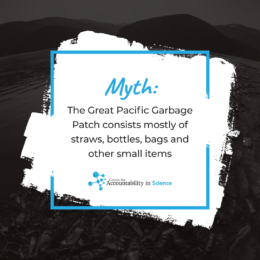 The Great Pacific Garbage Patch, a floating mass of trash that is the size of Texas located off the coast of Hawaii, is often evoked when environmentalists discuss the need to reduce single-use plastic waste. But most of the patch is not small items like bottles, bags, or straws. According to National Geographic, the bulk of the garbage patch is abandoned fishing gear. These abandoned “ghost nets” can entangle animals and cause other harm to the ocean.

Some of the fishing gear in the garbage patch has been abandoned on purpose, but as much as 20 percent of the abandoned fishing gear is believed to have been dragged out to sea during the 2011 Japanese tsunami.