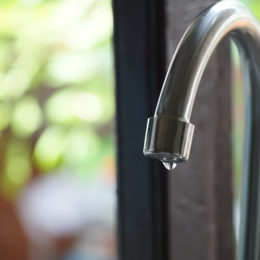 A new study in conjunction with Virginia Tech reveals various levels of lead in tap water across the United States. 97 households were tested just outside of New Orleans and 688 others across the country. Nearly 80 percent of homes had at least some levels of lead detected in their tap water, with 40 percent exceeding the recommended limit by the American Academy of Pediatrics.

Though it may come as a shock, lead in tap water continues to be an issue throughout the U.S. Even with lead pipes outlawed in 1986, the Environmental Protection Agency (EPA) estimates that anywhere between 6 to 10 million homes still get their water through lead pipes. But lead in tap water could also be a result of one’s plumbing, faucet, or water fixtures.

Jane Houlihan, Research Director for Healthy Babies Bright Futures, says that bottle fed babies are among the most at-risk. “A bottle-fed baby is the family member at greatest risk because they drink a far greater volume of water per pound of body weight than older children or adults,” said Houlihan. “[Children] have one chance to develop a healthy brain, and lead erodes that chance.”

According to study results, 15 percent of tested households had high enough levels of lead to potentially cause at least a half-point drop in IQ in exclusively bottle-fed infants.

The report also highlights African-American infants may be at a far greater risk. According to the CDC, 26 percent of Black infants are never breastfed. “Black children have a disadvantage before they even arrive,” said Christin Farmer, Founder of Birthing Beautiful Communities in Cleveland.

While there are no safe lead levels, parents shouldn’t panic. There are many resources available that provide free water testing and several ways to ensure your water is safe for your children. Filter attachments for faucets is one way. Additionally, purified, bottled water can be used for mixing formula.