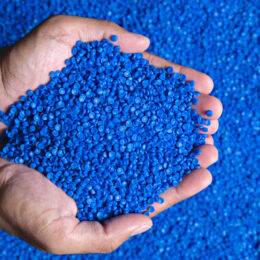 Because plastics are made from oils, it’s easy to assume the production of plastic will always produce excess greenhouse gas emissions. But that might not be the case.

A new study published in Science by researchers from Aachen University revealed there is a cycle in which plastic can be created and recycled with net-zero greenhouse gas emissions. The process utilizes three already existing technologies that can be implemented in concert to reduce waste and emissions.

In addition to recycling, the net-zero emissions cycle requires energy savings, too. Researchers proposed using biomass (burning trees, plants, and other natural materials) to power recycling facilities. Because biomass power emits some carbon dioxide, researchers would also need to implement carbon capture to counter the emissions released by the biomass. The study does not note whether nuclear power, which is carbon-free, could also be an alternative method of powering the recycling facilities. (We assume so.)

If the cycle is implemented in the same way it is depicted in the study, the plan could result in a potential savings of $288 billion in the United States alone.

Recycled plastic already has one of the lowest carbon footprints of any packaging material. Recycled plastic emits half as much carbon dioxide as aluminum can production and one study found that glass has a global warming potential that is 95 percent higher than aluminum cans. No matter which material is used, recycling will have to be a key part of any emission reduction plan.