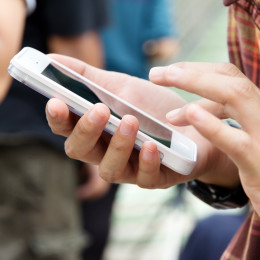 According to the Centers for Disease Control and Prevention (CDC), January is smack dab in the middle of flu season. And while your friends and coworkers walk around coughing and sniffling, there are a few less-conventional steps you can take to minimize your exposure to this year’s most common strain (H3N2, for the curious).

Everyone should know that hand washing is one of the most effective means of preventing illness, but what about the electronics you touch between trips to the sink?

Influenza viruses generally persist on hard surfaces like smartphones, keyboards, touchpads and mice for up to 8 hours. Even though your hands are clean, you risk “self-inoculation,” or introducing viruses (and bacteria, for that matter) to your face each time you tweet or Google. After all, people touch their faces approximately 16 times each hour while performing office-related tasks.

Apple recommends disinfecting wipes for its computers, and less abrasive methods for touchscreens.

And of course, if you haven’t gotten a flu shot this season, you might want to talk to your health care provider. Flu vaccines work by triggering the production of antibodies, which neutralize pathogens and alert the immune system to the presence of a foreign invader. It takes approximately 2 weeks to build up enough antibodies for the flu vaccine to become effective.