No, Wi-fi isn’t Making you Sick 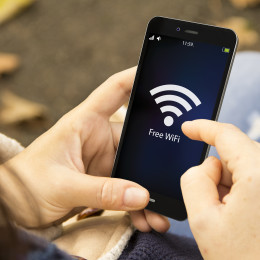 If you live in the New York area, you may have seen the local CBS affiliate’s “investigative report” detailing the possible health effects of wireless technology. But this story isn’t a result of a new peer-reviewed study, or even a medical doctor describing a medical problem observed in patients….it’s the story of one woman who explains how she suddenly had  “Headaches, perspiration, pain in my jaws and my heart” after installing wi-fi in her apartment.

Without any medical corroboration, CBS New York takes her claim that wi-fi is causing her health problems as fact. The report goes on to say it’s an actual medical condition, claiming: “It’s called wi-fi sensitivity, and doctors say it’s a very real condition with serious consequences.” As “evidence” the report cites Dr. David Carpenter, an “expert on wi-fi’s effects” who says “There is a body of evidence that is strong. it’s not 100 percent understood, but it’s strong evidence that this is a real syndrome that causes real harm to real people.”

CBS is probably talking about a condition known as “electromagnetic hypersensitivity” or EHS—a medical condition in which exposure to electromagnetic fields (EMFs) has been linked to health problems—that has been studied by the World Health Organization. But as the WHO points out, the “majority of studies indicate that EHS individuals cannot detect EMF exposure any more accurately than non-EHS individuals. Well controlled and conducted double-blind studies have shown that symptoms were not correlated with EMF exposure.” (emphasis added.)

The report goes on to point out:

It has been suggested that symptoms experienced by some EHS individuals might arise from environmental factors unrelated to EMF. Examples may include “flicker” from fluorescent lights, glare and other visual problems with VDUs, and poor ergonomic design of computer workstations. Other factors that may play a role include poor indoor air quality or stress in the workplace or living environment.

There are also some indications that these symptoms may be due to pre-existing psychiatric conditions as well as stress reactions as a result of worrying about EMF health effects, rather than the EMF exposure itself.

In 2005, a peer-reviewed study published in Psychosom Medicine looked at the most rigorous studies of EHS and concluded, “The symptoms described by “electromagnetic hypersensitivity” sufferers can be severe and are sometimes disabling. However, it has proved difficult to show under blind conditions that exposure to EMF can trigger these symptoms. This suggests that “electromagnetic hypersensitivity” is unrelated to the presence of EMF, although more research into this phenomenon is required.”

In 2012, a study asked randomly assigned participants to watch either a television report about the adverse health effects of WiFi or a control film. After, the participants were told they were being exposed to WiFi (even though they weren’t) and the participants shown the WiFi health report were more likely to report symptoms of EMF than those who watched the control film. The authors concluded, “Media reports about the adverse effects of supposedly hazardous substances can increase the likelihood of experiencing symptoms following sham exposure and developing an apparent sensitivity to it. Greater engagement between journalists and scientists is required to counter these negative effects.”

Of course, a news story saying “the most rigorous research indicates that exposure to electromagnetic fields like wi-fi doesn’t cause physical symptoms,” is a lot less interesting to viewers than “Woman Says Her Wi-Fi Connection Is Making Her Sick.” This is just another example of reporters’ alarming preference for the “if it bleeds it leads” approach to science journalism.