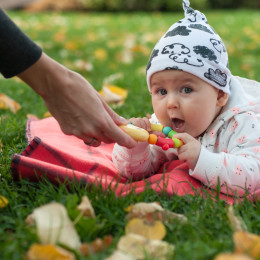 You may have come across this afternoon’s latest health outrage surrounding the potential for infant teething products to expose babies to dangerous chemicals. As is often the case, it seems as though the science behind the claims has been lost in translation.

A report published today in the journal Environmental Science & Technology tested whether, and to what degree, baby teethers or pacifiers leach chemicals commonly referred to as endocrine disruptors.

While “endocrine disrupter” sounds scary, most of these chemical ingredients are unable to induce negative health effects even in doses much higher than what the general population is exposed to.

Parabens are a class of chemicals which help to ward off dangerous microbes from consumer products. At ultra-high concentrations, parabens may mimic certain hormones, potentially disrupting associated functions in the body. But of course, the dose makes the poison. Many substances which are completely harmless at normal concentrations become dangerous at excess levels. Even coffee can kill you if you drink enough (about 70 cups, if you were curious). As can water.

The World Health Organization has suggested an acceptable daily paraben intake level of 10 milligrams per kilogram of body weight. This value in itself is several orders of magnitude lower than the human equivalent of the dose required to elicit any effect in animals.

With all the hullabaloo, you may assume that the amount of parabens leaching from baby teethers vastly exceeds this safety standard. Or even comes close to it.

In reality, even under the most extreme conditions, the maximum paraben exposure level was a fraction more than five thousand times smaller than Europe’s accepted standard.

Interested consumers should take hysterical health claims with a grain of salt. But not too much – 152 teaspoons of that will kill you, too.