PETA Wants the U.S to Stop Funding Animal Research. Should We? 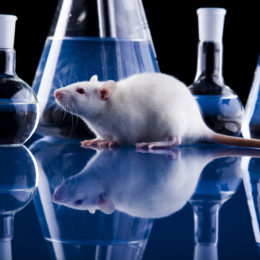 PETA attempted to pin one of the biggest issues in modern research – the fact that many experiments can’t be replicated – solely on the fact that we look to animals to guide scientific knowledge. HHS threw some major shade in its response to the group, casually name-dropping fifteen “critical discoveries” in human medicine that all originated from animal research.

Certainly, not every species serves as an appropriate model for medical research. For example, the gender of many reptiles, like turtles and lizards, is determined by the temperature of their egg before they hatch. But genes determine anatomical sex in humans. Since our early reproductive development is so different, our cold-blooded companions probably aren’t the best models to study how chemicals like BPA affect the human reproductive system.

But we’d never know which animals models were appropriate in the first place were it not for curious researchers. In fact, many important medical advancements are based on early animal research that initially had no disease link at all.

Let’s look at PETA’s favorite example: research in HIV and AIDS, or as the group puts it, a “waste [of] precious time and resources.” PETA claims that since most HIV vaccine trials have failed, we should scrap animal research in the field altogether.

Perhaps PETA should review some medical history. Without studying chickens, livestock, and cats, scientists never would’ve known how to combat HIV at all. HIV is a “retrovirus”, a type of virus that turns its own genetic material into DNA and plants it into our cells – almost completely backwards from how most viruses work. They’re common in animals, but not humans.

Similarities between AIDS and certain animal diseases led scientists to believe a retrovirus caused AIDS in the first place. Because of decades of knowledge from prior animal research, scientists knew which part of the virus to target with drugs. It took only 4 years for the first antiretroviral drug to hit the market. By the way, that drug came directly out of clinical studies using mice and primates. And the first tests to identify HIV in blood (ensuring its safety for transfusions) had origins in animal research as well.

Today, stalled discoveries could indicate that some mammals are poor models for HIV vaccine research. That’s why, along with animal studies, HHS funds computer modeling, tests on human tissue, and trials on human subjects.

But eliminating all animal research? Ludicrous. If PETA got its way, not only would America lose our reputation for scientific prestige, but we’d also be wholly unprepared to tackle future outbreaks.

Frankly, we’d prefer disease research not to be pushed back to the dark ages, thanks.