Plastic Is Better for the Planet than 13 of 14 ‘Green’ Alternatives: Study 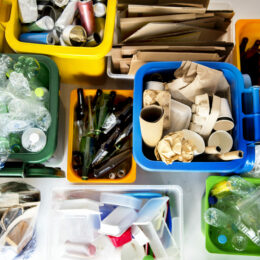 Many environmentalists have called for plastic to be banned. But a new analysis shows that plastic is actually “greener” than alternative materials.

A new report from McKinsey and Company found that plastic had a lesser greenhouse gas footprint in 13 out of 14 alternative products the organization tested. Total emissions savings from plastic ranged from 10 to 90 percent in the total greenhouse gas reduction over the lifespans of the objects (from production to the landfill or recycling center).

The 14 objects chosen represent 90 percent of all plastic items used in the United States, including bottles, cups, jugs, fabrics, and food packaging. Each object was compared to common replacements such as glass, metals, fibers, or some combination of the three. When it came to some beverage packaging, the researchers compared pure plastic options, such as a bottle, to products that include less than 20% plastic, such as cartons (which are made from glued layers of paper, aluminum, and plastic).

Plastic was better for the planet in almost every instance.

First, production. Wood, metal, and glass all require more upfront emissions than plastic, and our power grid is predominantly fossil fuel-based. But even if the United States aggressively works to transition to a carbon-free power grid by having a majority of renewable energy by 2050, PET plastic would remain a more environmentally friendly option.

Second, plastic is lightweight. This means plastic requires less fuel consumption for transportation. (Again, the relative benefit of plastic could be reduced if the power grid is decarbonized, but that is not likely anytime soon.)

Third, plastic is more effective at containing other products that emit greenhouse gasses.

While products like bottles, straws, or bags typically come to mind when thinking of plastic, many essential tools also require plastic. The study was unable to test alternatives to plastics used in cars, technological devices, and other tools simply because no alternatives are in use today.

If reducing emissions is the goal, plastic is the clear winner. Instead of promoting plastic bans, environmentalists should be encouraging recycling and taking steps to reduce litter and waste.