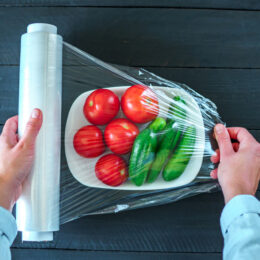 Plastic has garnered a bad reputation from most environmentalists, but a recent study shows that some plastic may actually protect the planet.

The study, which was published by researchers from the Swiss Federal Laboratories for Materials Science and Technology, revealed that using plastic wrap on foods can significantly reduce the food’s carbon footprint.

According to the study, plastic wrap acts similarly to the peel of many fruits and vegetables. It keeps produce like cucumbers and broccoli from being exposed to oxygen, which can speed up the rate at which the food rots and becomes inedible. The study specifically looked at the process of transporting cucumbers from Spain, where they are grown, to Switzerland.

For the plastic wrap to break even, it needs to prevent 1.1 percent of the cucumbers from rotting before they can be sold. The researchers found that plastic wrap prevented retail losses of 4.8 percent. The consequences of leaving food unwrapped were 4.9 times worse for the planet than the environmental footprint of the plastic that was used.

In other words, it is nearly five times better for the planet to use plastic than to leave produce unwrapped. The findings of this study bolstered a 2012 study that found that wrapping a cucumber can extend its shelf life by up to 15 days.

Despite evidence that food wrap benefits the planet, France recently announced that it would be outlawing the use of plastic wrap for foods by 2025 as part of its effort to reduce plastic waste. Many so-called “zero waste” grocery stores have already stopped using plastic wrap.

This trend could lead to significant problems for the planet. Even with plastic wrap in use, the US Department of Agriculture estimates that between 30 and 40 percent of food is wasted. Rotting food emits methane, a potent greenhouse gas. The United Nations Food and Agriculture Organization noted that, if food waste were compared to other countries, it would rank third in total emissions behind only China and the U.S.

Plastic has been wrongly demonized by many environmentalists who have failed to acknowledge the unintended consequences their actions can have. Without plastic wrap, food waste emissions will increase, further accelerating climate change.

Instead of making things worse, environmentalists should focus on ensuring that every country has the proper infrastructure in place to manage plastic waste to keep it from blowing into oceans or other ecosystems we care about.