Po-tay-to, Po-tah-to, But Please No Mold 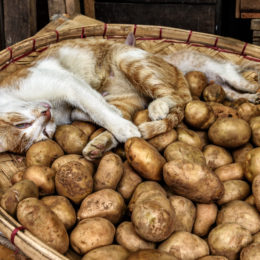 Most people are familiar with the Irish Potato Famine, when upwards of 1 million people died from starvation and disease after Ireland’s potato crop failed for several years.

But we would guess that fewer people know that Phytophthora infestans, the mold responsible for “late blight” which caused the famine, still remains a major pest to this day. Thankfully, with more than a century and a half of agricultural innovation at our backs, we’ve developed ways to combat crop-destroying pests.

Until now, these methods (yes, even in organic agriculture) largely amounted to dousing infected crops with fungicide to kill the mold. It’s an imperfect method which subjects the mold to a sort of evolutionary roulette – if fungicide is not applied strongly enough, the few organisms which survive may reproduce to create a generation slightly more resistant to the fungus-killing spray. A similar concept fuels the advice that you should always finish the full course of antibiotics prescribed by your doctor.

Some strains of blight no longer respond to certain fungicides, although the problem is not yet widespread.

Thankfully, science is rarely ever satisfied with the status quo. The Idaho-based J.R. Simplot Company engineered their new potatoes to resist late blight by inserting genes from an Argentine variety of potatoes that are naturally less susceptible to infection. Researchers even estimate that the crop could cut fungicide use in half.

Mold-free potatoes that require less intensive farming practices? We’ll call this one a win for science.

With EPA and FDA approval secured, the potatoes could reach a grocer near you as early as this fall.