Raise a Glass for Your Health 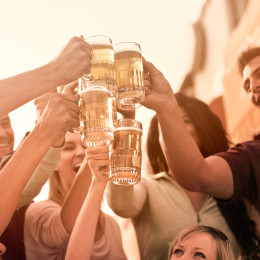 Good news for those of us who enjoy a drink with dinner: two newly-published reports are adding to the list of research documenting potential health benefits of light to moderate drinking.

One study published in the European Heart Journal examined nearly 15,000 participants over several years and found that an average of a drink a day is associated with a lower risk of developing heart failure by 20 percent for men and 16 percent for women.

While alcohol abuse is associated with heart complications, Dr. Scott Solomon, a professor of medicine at Harvard Medical School and senior physician at Brigham and Women’s Hospital, said in a press release, “These findings suggest that drinking alcohol in moderation does not contribute to an increased risk of heart failure and may even be protective.”

A second study took alcohol’s potential health benefits even further—when weighing all the risks and benefits, having an occasional drink with dinner might be preferable to abstaining entirely.

According to the report’s author Dr. Emanuel Rubin, a pathologist at Thomas Jefferson University Hospital in Philadelphia, while “in the lay press and media, the beneficial effects of moderate alcohol consumption are still controversial,” numerous medical studies have shown its potential benefits.

Benefits such as a lower risks of many serious health complications like heart attacks, stroke, obesity, type 2 diabetes, osteoporosis, dementia and depression.

It’s important to note that the potential health benefits of moderate alcohol consumption are erased – and even reversed – by heavy use.

While you should follow the recommendations of your personal physician, Dr. Rubin wrote, “The overwhelming evidence suggests that physicians should counsel lifelong nondrinkers at about 40 to 50 years of age to relax and take a drink a day, preferably with dinner.”