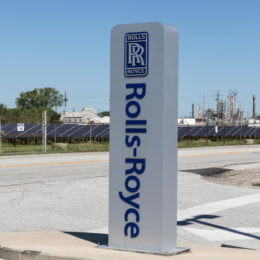 Rolls Royce is aiming to change the future of power generation in the United Kingdom.

The company called on officials in the U.K. to provide funding for 16 small modular reactors (SMRs) which could generate carbon-free nuclear energy for England. If granted, the plan would create 6,000 new jobs over the next five years with the first mini plant operating within a decade.

The SMRs are small nuclear power generators manufactured in Rolls Royce factories which can be transported piece-by-piece to regions of the country to provide clean power — a major innovation over the monolithic nuclear power plants of the 1970s. These smaller plants still pack a big punch, creating enough power to run a city of 450,000 homes for an estimated 60 years.

The smaller plants will allow for even more innovation in nuclear power generation as they are implemented. There aren’t many of the current, massive nuclear power facilities in the world, making it difficult for innovators to see the flaws and learn from those mistakes. With a smaller, assembly line type process, SMRs will have more flexibility and adaptability than the 1970s era plants

Rolls Royce’s proposal could not have come at a better time for the U.K. Six of the U.K.’s seven nuclear reactor sites will be required to go offline by 2030. The seventh reactor is set to go offline in 2035. Replacements are necessary if the U.K. has any chance of reaching its goal to achieve net-zero emissions by 2050.

As usual, confused environmental activists have condemned the proposal despite the clear benefits.

Doug Parr, Greenpeace U.K.’s chief scientist, rehashed the organization’s old wives’ tale that nuclear power plants are unsafe and could lead to weapons proliferation throughout the world. Greenpeace has been pushing this misinformation since it was founded in the 70s.

They called on environmentalists to promote innovation and safety in nuclear energy rather than blindly opposing the power source. They noted that — unlike wind and solar — nuclear is a highly efficient form of energy that can power entire countries with little carbon emissions.

Still, Greenpeace has continued its opposition to nuclear power. Parr argued that U.K. officials should stop investing in nuclear power and switch to investing in hydrogen fuel or geothermal energy. Geothermal energy, however, is limited to geographic regions where the crust is thin enough to access the heat needed to create the energy. The U.K. does not have any geothermal plants.

Hydrogen fuel has its own drawbacks. Much like solar and wind energy, scientists have not figured out an effective way to store hydrogen fuel. Experts also fear that hydrogen will escape during the process, which could harm the ozone layer.

It is not yet clear if officials in the U.K. will pursue the nuclear project, but it is clear that nuclear power will need to be a part of any plan to reach net-zero emissions — even if the activists at Greenpeace throw their usual tantrum.