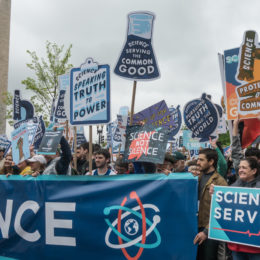 Last weekend, thousands of scientists and science enthusiasts took to the streets to March for Science. Cheering for evidence-based science en masse, participants hoped the event would inspire Washington to keep research far from the political chopping block. But some scientists worried the event’s perceived liberalism would further polarize science policy issues.

To some degree, it’s a valid concern. Any researcher whose field hints at climate change already has a hellish time convincing conservative lawmakers that their work constitutes the best available science. At the march, posters supporting the deeply politicized issue abounded, making it easy for conservatives to dismiss the movement as an extension of recent liberal protests.

But a far more nuanced issue is at stake: We cannot allow one side of the political spectrum to claim a stranglehold on “science.” If conservatives dismiss science as a liberal constituency, they stand to lose some of the staunchest allies of innovation and technology.

Americans of all political stripes have historically invested a high degree of trust in the scientific community, and a 2016 Pew Research Center survey evidences the continuation of this trend. More than 75 percent of the populace trusts scientists, and confidence jumps further for medical scientists.

In fact, support far outpaces that for even religious leaders (52 percent), the media (38 percent), and politicians (27 percent). So why, when Hillary Clinton announced, “I believe in science” at the Democratic National Convention, was she met with such resounding applause?

For one, Republicans have allowed their political foils to caricaturize the entire party as anti-science, and given a pass to pseudoscientific theories often held by the left-leaning.

Consider nuclear power, the cleanest and most cost-effective means of meeting the world’s burgeoning energy requirements. Two-thirds of professional scientists, including some of the world’s top climate experts, call for greater development of nuclear power. Yet Gallup reports that Republicans are almost twice as likely as Democrats to support the use of nuclear energy.

It should come as no surprise that Republicans tend to favor the science of industry, and that the safety of industrial advancements are most often dismissed by Democrats.

The distaste (and willful ignorance) extends to synthetic substances more generally, with many of the same activists unwilling to appreciate the fundamental tenant of toxicology: The dose makes the poison. Just last week, healthcare giant CVS caved to activist demands to remove parabens, phthalates, and preservatives from its personal care products — even though such products won’t expose consumers to harmful levels of any of these chemicals. But in their absence, consumers may find their makeup and lotions tainted by bacterial and fungal growth.

In reality, “reproducibility” doesn’t mean staging a second oil spill to corroborate the impact of Deepwater Horizon. But it does mean collecting a robust and extensive library of data, allowing other scientists to gauge the strength of a correlation with their own findings.

Conservative lawmakers aren’t “anti-science” for wanting strictly evidence-based regulations. But the more we allow this brand of messaging to dominate, the more we sacrifice scientific prestige to partisan politics.

Regardless of how the public interpreted last weekend’s protests, louder scientific voices might do wonders convincing a hesitant public that both modern chemistry and climate science are some of their greatest assets.