Should You Say ‘No’ to Paper Receipts? 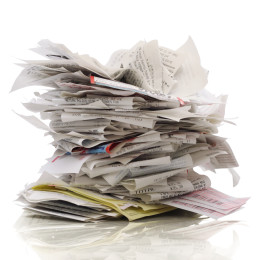 By now, most consumers are used to seeing plastic water bottles and food containers marketed as “BPA-free” even though major government agencies such as the U.S. Food and Drug Administration and European Food Safety Authority (EFSA) insist BPA poses no risk to consumers of any age. But BPA is used in more than just food packaging—it’s also used in many receipts printed on thermal paper.

The use of BPA in receipts is starting to get more attention from environmental activists. The Environmental Working Group regularly puts out reports showing consumers can be exposed to BPA by handling paper receipts from major retailers. And a study published last year in PLOS One found that if participants handle a receipt while their hands were still wet with hand sanitizer and then ate French fries without washing their hands, they had higher levels of BPA in their urine. (You can read our full breakdown of this study here.)

While these studies show you can be exposed to BPA from a receipt, they do not show this exposure is harmful to your health.

During its most recent assessment of BPA’s safety, EFSA specifically considered the level of BPA exposure from receipts (along with BPA exposure from other sources, like canned foods) and still found that average daily exposure to BPA is well within safe levels.

Last week, the European Chemicals Agency’s committee for socio-economic assessment looked at the cost of banning BPA from receipts and found that the benefits of such a restriction do not outweigh the cost. Next, the full European Commission (the European Union’s governing body) will decide whether to restrict BPA.

Another thing that often gets lost in these debates about ingredients and chemicals is that they are included for a specific purpose, so when activists clamor for their removal manufacturers must replace them with something. In the case of BPA, that something is another chemical that hasn’t been tested and studied nearly as much as BPA.

The holidays are stressful enough without adding the worry of whether receipts could be harmful to your health. To be clear: shoppers have no need to fear—you’re more likely to suffer a paper cut from a receipt than health issues from BPA exposure.