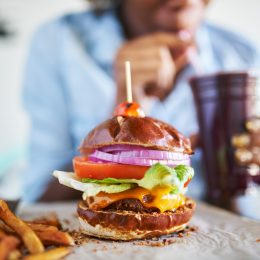 Throughout the month of January, several independent academic reports concluded that vegetarianism is the only way to combat climate change and chronic disease. The claims generated plenty of media controversy, from NBC News reporting that we can “Save the planet and lives by eating less meat, more vegetables” to Vox’s apocalyptic declaration that “The way we eat could doom us as a species.”

We tend to disagree.

Swapping a beef burger for a veggie burger is an easy enough substitution, especially considering meatless options have expanded in the past several years to include options that look, taste, and smell far more appealing than the Tofurky of millennia past. But as our research director argues in a recent op-ed, climate change solutions with real staying power (not to mention a real impact) need to offer more than an aspiration for people to eat more vegetables. Rather, technological advancements can reduce the emissions intensity of meat production. In many cases, it already has.

You can read more about how agriculture is using science to its advantage in the op-ed excerpt below, or read the whole piece on the Florida News-Press website:

Globally, livestock makes up roughly 5 percent of greenhouse gas emissions. In the U.S., it’s closer to 3 or 4 percent. Even when one considers the long shadow of bringing animal protein from soil to cow to table, the energy use and emissions cannot compare to the lifecycle impacts of transportation or electricity and heat production. By the Lancet commission’s own modeling, transitioning away from fossil fuels would cut agricultural emissions by about 75 percent – not to mention the outsized impact that high-efficiency or electric vehicles would have on transportation emissions writ large.

What’s more is the United Nations’ Intergovernmental Panel on Climate Change identifies agriculture as the only sector that hasn’t increased its emissions footprint since 1990. However, neither Lancet report devotes any substantive conversation to the technology that got us there.

Researchers at the University of California-Davis are experimenting with adding seaweed to cow feed to reduce the amount of methane produced when grazing animals belch and fart. Ryan McCarthy, the Science and Technology Policy Advisor to California’s Air Resources Board, notes that the diet change may “reduce [enteric] methane by 30 percent or more.” It’s enough to put red meat emissions on a comparable footing with fish.

Additionally, some of the world’s largest livestock operations are already utilizing biogas recovery systems that capture methane from animal waste and convert it into a cost-effective source of renewable energy. Last fall, top U.S. pork producer Smithfield Foods announced that it would outfit more than 90 percent of its hog finishing spaces in North Carolina, Utah, and Missouri with the technology. To put the impact into perspective, consider this: A single upgraded biogas recovery plant at a Seaboard Foods subsidiary recovers enough natural gas to power more than 5,300 homes a year.

However, in the U.S., agricultural soil management takes the cake as the sector’s most significant single emissions source. Improper soil management techniques are also a major factor in waterway pollution. Here, too, technology has lent a hand. In the past decade, satellite-based apps that allow farmers to survey their land from above have exploded. This precision management allows farmers to apply less fertilizer, fewer pesticides, and save money in the process.

Technological innovation has always driven agricultural production to be more efficient, and the financial benefits for both producers and consumers ensure that it always will.