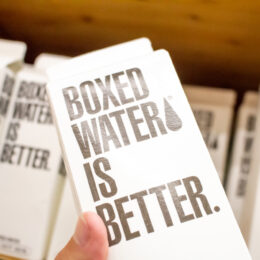 In recent years, new companies have started selling water in cartons instead of aluminum cans or plastic bottles, often while claiming this alternative packaging is superior on environmental grounds.

The company Boxed Water Is Better touts its environmental credentials and claims that cartons are the eco-friendly alternative to plastic, glass, or aluminum. But a lot of the company’s environmental claims are more spin than science.

Our paper-based cartons are 92% renewable and way less destructive to our planet than single-use plastic bottles and aluminum cans.”

The company also made the same statement, worded slightly differently. “Our paper-based cartons are 92% renewable and way less destructive to our planet than single-use plastic bottles and aluminum cans.”

Boxed Water argues that its product is better for the planet simply because it is “renewable” and plant-based. Get the head fake? “Renewable” is a term that gets you thinking “Recyclable.” But renewable just means it is a product that has an unlimited supply. In this case, the company appears to be claiming that paper is renewable since trees regrow. But it means nothing when it comes to the planet.

Cotton bags, for example, are “plant-based” and “renewable” but according to a report from the New York Times,  they are several thousand times worse for the environment than plastic bags.   And trees are a lot less “renewable” than cotton in one important area: Trees take decades to grow to full size while cotton is seasonal.

The fact that cartons are self-congratulatory “92% renewable” doesn’t make a difference. But the other 8% that isn’t “renewable” is where the real problem comes in for Boxed Water.

Cartons are made from glued layers of plastic, paper, and aluminum. The lids for cartons are also made from HDPE plastic. (Ironically, Boxed Water is running a petition to get people to pledge to not use plastic for 30 days — despite using plastic themselves.)

These layers cause big problems for recycling centers. They cannot be made into new cartons.

Boxed water cartons are also only accepted in 60 percent of recycling centers meaning that many Americans don’t even have the option to recycle cartons if they wanted to. A study from the Danish Environmental Protection Agency found it was better for the planet to incinerate cartons than recycle them.

But Boxed Water seems to ignore this little detail and champions its product as “100% recyclable and refillable with some common sense care.” This is no different than a plastic foam company saying their product is 100% recyclable despite only being able to recycle the product in highly specialized centers that most Americans have no access to.

Besides greenwashing the term “renewable” and touting some questionable recycling claims, Boxed Water relies heavily on a self-funded study for its environmental credentials. Boxed Water paid for a life-cycle assessment comparing a carton, a PET plastic bottle, and an aluminum bottle.

To say this study has some questionable methodology would be putting it lightly.

The main study followed a Boxed Water carton which had all of its environmental credentials painted in the best light possible. The plastic and aluminum were not so lucky. The plastic bottle had 0 percent recycled plastic and it was based on a Fiji Water bottle, which is high-end bottled water that comes in a squared bottle with thicker plastic than a thin generic PET bottle. The aluminum product used was a resealable aluminum bottle despite most leading canned water options being made from a traditional non-resealable can with the pop-tab.

Curiously (conveniently?), the study excluded the actual table of numbers comparing the various container products. Perhaps the differences were not substantial. The study did include one chart that showed recycled plastic water bottles were almost the same as the carton. Other similar studies have found the greenhouse gas emissions between the two packages to be nearly identical.

In the recommendations section of the study, researchers accidentally said the quiet part out loud. They noted that cartons cannot currently be recycled everywhere, writing, “Encourage customers to put pressure on their local authorities to collect and recycle cartons.”

Currently, boxed water options are growing in popularity but they are nowhere near commonplace. If plastic was eliminated and cartons filled the gap, it would take a lot of trees to make up the need for paper. This little detail has forced Boxed Water to walk an environmental tightrope.

In response, the company has launched a pledge to plant one million trees. It’s a nice sentiment but they forgot the need to create new forest land. And while they hint that deforestation is a problem for their eco-friendly image, the company tends to downplay its part of the problem — especially if the product continues to take up market share.

There are seemingly daily innovations in addressing plastic pollution through improved recycling or other practices. It is possible — in fact, likely — that scientists will be able to make plastic bottles a closed-loop product in which everything will be recycled and virgin materials will be used far less.

But that’s not the case for paper cartons. Plastic can continue to innovate but paper will never be waterproof unless new chemicals are added. And without waterproof paper, cartons will always require layers of other materials to make them work.

There may be some other peculiar reasons to buy boxed water, but protecting the environment isn’t one of them.