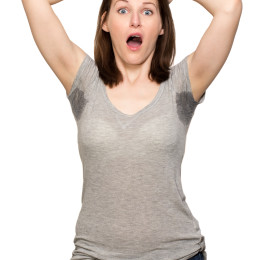 One of the most popular posts on the “Food Babe’s” blog is titled “Throw This Out Of Your Bathroom Cabinet Immediately.” So what does our resident food non-expert want to warn you about this time? Your antiperspirant!

According to the blogger, aluminum zirconium—a common ingredient in many antiperspirants—could cause breast cancer and Alzheimer’s. Unsurprisingly, she doesn’t give a single study to back up these radical claims. So we looked to actual experts and scientific research for answers.

The Director of Medical Content for the American Cancer Society, Ted. S. Gansler, MD, MBA, sums it up: “There is no convincing evidence that antiperspirant or deodorant use increases cancer risk.” The National Cancer Institute (NCI), part of the National Institutes of Health, says its researchers “are not aware of any conclusive evidence linking the use of underarm antiperspirants or deodorants and the subsequent development of breast cancer.” NCI’s website has an excellent summary of the research that’s been done of the subject and a link to a number of studies.

As far as the antiperspirant/Alzheimer link—scientists don’t consider aluminum as a possible cause of Alzheimer’s. Instead the notion that aluminum can cause Alzheimer’s is considered “an old legend;” a 1990 study in the Journal of Clinical Epidemiology, found no association between aluminum-containing products and Alzheimer’s disease.

Even in the absence of any research backing up her scary claims, the Food Babe has provided you a list of “safe” deodorants—all of which cost two to four times the typical cost of a single stick of deodorant.  But you don’t have to shell out $13 per stick to be assured your deodorant is safe to wear—research shows that wearing deodorant/antiperspirants doesn’t pose any real risk to your health.