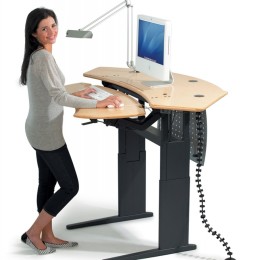 To be fair, the intention behind the desks is commonsensical: modern, white-collar life is sedentary—we sit all day at work, sit during our commute home, plop onto the couch once we get there, then spend 8 hours a night lying asleep. As a species that was evolutionarily tailored to hunt and chase animals to exhaustion, sitting around this much is awful for us—both physically and mentally.

Although NPR joked when it wrote “sitting is the new smoking”, there is a certain truth to this. Researchers are constantly releasing new studies warning about some new, horrible risk about sitting too much—increased risks for heart disease, back problems, mental problems.

With so many studies showing how bad sitting is for our health, the creators of the standing desk came up with a seemingly logical solution: Office workers need to stand more.

There is a problem though. Standing is not necessarily the opposite of sitting, and therefore, isn’t necessarily better for you than sitting. What humans really need for their health is more movement. Exercise, even just walking around your office more, is much more important for your health than answering emails while standing still.

If you like your standing desk, there’s no reason to start sitting down at work. But consumers should know that the health claims of standing desks, like many other fad health products before it, simply aren’t supported by the science.