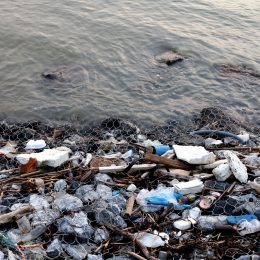 The pictures and videos showing wave after wave of garbage piling up on Montesinos Beach in Dominican Republic are pretty horrifying. The New York Times reports that 60 tons of garbage had been collected from the site in just one week, with plenty more still piling high against palm trees and covering tide pools.

Clearly, many of these stories point out, the pollution is a symptom of our love affair with single-use plastic. Right? Wrong.

As CNN, The New York Times, and Time note in the final sentences of their coverage, the garbage isn’t ocean plastic washed ashore. It’s coming from Dominican Republic’s own Ozama River, which is used as a dumping ground for trash.

In fact, 86 percent of the roughly 150 million tons of plastic in our oceans comes from similar disposal habits at a handful of rivers in Asia. The United States contribution to ocean plastic is less than one percent.

The Ocean Conservancy lists four ways that the world’s biggest polluters can curb the amount of plastic that makes it to the ocean:

Increasing waste-collection rates by expanding collection service. On average, only 40 percent of trash is collected in China, Indonesia, the Philippines, Thailand, and Vietnam.

Converting waste to fuel or energy to give trash value, and incentivize collection.

Ocean plastic is a huge problem, and consumers should take care to only use plastic products as necessary and dispose of them appropriately. Yet plastics also help prolong the shelf life of foods, reducing food waste and limiting the energy input that goes into feeding the global population. It’s a complicated situation, but we can be sure that making a meaningful impact on ocean pollution requires more than swapping your straws for a sippy cup (we’re looking at you, Starbucks.)