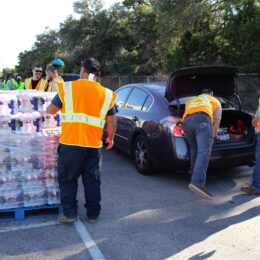 While 2022 brought a lot of good news in many ways, America’s tap water supply continued to present issues throughout the country. According to the CDC, 7 million people suffer from waterborne illnesses each year in the United States, including roughly 7,000 deaths. These illnesses cost Americans roughly $3 billion in annual healthcare expenses. The American Society of Civil Engineers estimates that a water main breaks every two minutes in the United States. Many of these result in contaminated tap water that carry waterborne pathogens.

Here are a few of the most significant water failures of 2022:

Jackson, Mississippi, has become the epicenter of America’s tap water crisis. Aging infrastructure has resulted in continuous drinking water outages that have forced school closures and left many refusing to drink the tap water at all. While the usual outage hits just a few neighborhoods at a time, one major outage in September left the entire city without running water for nearly a week. Things have gotten so bad for the city of 150,000 people that the Department of Justice recently filed a lawsuit against the city for its failures.

Houston, Texas is the nation’s fourth-largest city and home to more than 2.2 million people. Just after the Thanksgiving holiday, all 2.2 million residents of the city were left without access to safe water for two days. The outage was caused by a power failure at the city’s water treatment center.  Residents were not initially directly notified by the city and many only found out that they needed to boil water after seeing social media posts.

Austin, another Texas city with more than a million residents, suffered a similar water outage in February. This boil water advisory was issued after the city revealed that errors had occurred within the city’s water treatment center rendering the water unsafe for consumption. These major water outages are not infrequent in Austin. In recent years, flooding and winter storms have caused similar city-wide outages.

Baltimore, Maryland, is one of the largest cities in America to suffer a prolonged water outage due to E. coli contamination. E. coli is a serious pathogen that can cause digestive issues – even death – in those who consume it. Residents of Baltimore were without water for five days in September after E. coli was detected in the water supply. Subsequent investigations revealed that the E. coli contamination was caused by the city’s aging water infrastructure – an issue that plagues many American cities.

More than 133,000 residents in the Detroit metro area were left without water for three weeks between August and September because of a major water main break. The initial water main break caused an outage for 935,000 residents, but it was resolved within a few days. It was just seven unlucky communities that were left to suffer for weeks.

Hawaiians – specifically those serving on Navy bases – had a terrible year in terms of tap water. The year began with the discovery that jet fuel had been leaking into the drinking water, leaving many ill. This mess took months to fully address and a few wells are still shuttered. Then, a massive water main break left 93,000 people in Oahu without water. The Navy was recruited to distribute bottled water to its own people and nearby residents who were all left without a safe water source.

Residents in a few of the largest apartment complexes under the New York City Public Housing Authority were left without access to water after arsenic was detected in the water in September.  It took more than a week for leaders in the housing complex to determine that the arsenic had been the result of a testing error, not actual contamination. However, while running the tests for arsenic, another lab spotted Legionella, the dangerous pathogen behind the potentially fatal Legionnaires’ disease, in the water. The confusion led many residents to lose faith in the city’s water, with one telling the New York Times, “I’m still believing both of it is in it.”

Newark, New Jersey, is no stranger to tap water disasters. The city spent years trying to lower lead contamination within the city’s water supply. And while the lead levels seem to have dropped, crumbling infrastructure has continued to cause tap water problems for the city. In August, a massive water main burst left more than 100,000 people without water. The water main break happened during one of the summer’s hottest heat waves leaving residents at risk of dehydration as they collected bottled water.

While many of the water outages featured on this list were large in scope, Boston was home to one of the smallest, but most heartbreaking, tap water failures. In November, the Franciscan Children’s Hospital announced that Burkholderia had been detected in the hospital’s water supply and had infected dozens of already sick children. Burkholderia is a pathogen commonly found in soil. While the pathogen typically has very mild consequences for healthy individuals, it can cause serious illness in those with compromised immune systems. After the pathogen was identified, the hospital was forced to stop using water in two areas of the facility.

According to the EPA, no level of lead contamination is safe. It’s especially dangerous in children because lead exposure can harm brain development, leading to behavioral issues and learning disabilities. That’s why it was especially concerning when officials in Delaware announced that 47 schools had elevated levels of lead in the school drinking water. Authorities detected lead at rates 12 times acceptable levels. The Delaware Division of Public Health required one school to shut down all drinking fountains, leaving the school with no choice but to distribute bottled water.