The Hidden Dangers of Tap Water 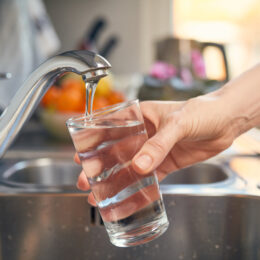 Tap water in the United States is supposed to be safe to consume, but the reality is that American tap water is riddled with contaminants including fecal matter, lead, pesticides, and other potentially harmful substances.

To raise awareness about this problem, today we are running a full-page advertisement in the Los Angeles Times warning Californians about the hidden dangers lingering in their tap water. We’re directing people to IsTapWaterSafe.com, a site we created to host tap water testing data as well as boil water advisories.

While there is plenty of data available to understand the hidden dangers in tap water, the Environmental Protection Agency has been holding up the release of a report that could shine an even brighter light on the contaminants floating in American tap water.

The Contaminant Candidate List, or CCL, is a list of contaminants that are not currently subject to any drinking water regulations. As part of the development and maintenance of the list, the Environmental Protection Agency asks the public to submit contaminants they believed should be regulated to keep the public safe. Four versions of the CCL have been made public over the years. In 2018, the Environmental Protection Agency asked the public to submit nominations for a fifth list.

It’s been two years since that call was made to the public. The CCL 5 has still not been released.

The EPA must release the CCL 5 so the contaminants in tap water can be properly regulated. Americans deserve to have the water supply as safe as possible. By withholding the latest CCL, the EPA is putting Americans at risk.

To help hold the EPA accountable, IsTapWaterSafe.com needs you to sign a petition demanding that the EPA publish CCL 5. You can find the petition here.