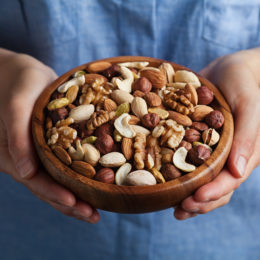 In a textbook case of sensationalist journalism, several outlets recently reported that eating nuts reduces weight gain, lowers the risk of obesity, and should be used to replace meat.

By that account, we can throw in the towel on the nationwide fight against obesity so long as the 70 percent of overweight and obese Americans add a handful of almonds to their diet. As you might guess, the solution isn’t quite that simple.

The international investigation found that over the course of 5 years, people who are nuts for nuts gained .42 to .11 pounds less than those who never ate nuts. That’s right – the difference amounted to less than half a pound! And as far as warding off obesity? According to the study, if you compared 200 heavy nut eaters to 200 people who don’t eat them at all, the nut-loving group would have just one less case of obesity.

That’s a far more realistic conclusion than what health magazines are reporting. Yet even in those claims, there’s still one last nut to crack: The study’s lead author used his investigation to recommend people replace their pork and poultry with peanuts and pistachios.

But the study never compared weight gain between meat eaters and vegetarians who substituted their animal protein for nuts. So that claim seems especially out of left field – until you realize the study’s lead author and one contributing author are scientists with International Agency for Research on Cancer (IARC), a group which has devoted hundreds of thousands of dollars to manufacturing a link between meat and cancer.

To put their claim into perspective, it’s about as justified as saying chewing gum doesn’t make you gain weight, so we should all replace our meat with Wringley’s.

If you’re among the heaviest nut consumers, fret not: tree nuts and peanuts are still nutrient dense, rich in protein and unsaturated fats, and a good source of fiber and minerals. And they’re delicious to boot. In short, you shouldn’t use nuts as a singular solution to weight loss – exercise and a well portioned diet (which can absolutely include nuts AND animal protein!) are still your best bets.

Our verdict? So long as your nutty snacks are part of a balanced diet, keep on cracking.