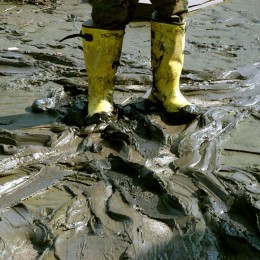 We debunked the new EWG report yesterday on how chemicals are found in our bodies. It relied on scare tactics and shoddy science. But it also appealed to an implicit conviction: that manmade chemicals are everywhere and they’re bad for us.

Of course chemicals are everywhere. But this isn’t inherently bad. In fact, it’s often a good thing, and denying that despite the evidence can be dangerous.

With so many fearmongerers broadcasting distrust, we decided it’s time to remind people of the progress made through the discoveries of modern science. Last week we covered GMOs. This week’s focus is the greatest medical advance in 150 years: Sanitation.

We often take sanitation for granted. But that’s because we don’t know what life was like before it.

One way to make up for our lack of experience is looking at opinions from the early 20th century.  These are helpful because they come from people who lived life before and after improvements in sanitation.  Writing during this period, President Calvin Coolidge remarked “wherever we look, the work of the chemist has raised the level of our civilization.” Now activists act as if chemistry is leading to its collapse.

To be fair, the “level of civilization” prior to sanitation was, well, let’s just say low. Take 19th Century London for example, where:

Sanitation was improved by chemists working on different problems in various disciplines.

The average American lifespan today (2014) is 78 years, while in 1900 it was just 46 years. One of the driving forces of this is clear: sanitation. And knowing how dirty life in the 19th century was, it’s plain to see that chemistry helped make sanitation work.