Toilet to Tap? 5 Things To Know About Recycled Tap Water 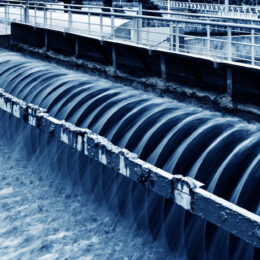 Public utility officials are turning to some unlikely sources to address tap water problems: the gutter and the toilet.

While the idea of drinking sewer water is enough to make one’s stomach churn, some experts believe reclaiming used water may be vital to keep a growing population hydrated. Here are five things you need to know about recycled water.

What is recycled water?

Recycled water — sometimes referred to as reclaimed water, effluent water, or treated sewage water — is used water from domestic sewage, industrial wastewater, and stormwater runoff that is collected, purified, and returned to consumers as tap water.

Currently, the average American uses roughly 90 gallons of water per day. Just two of those gallons are used for drinking and cooking. The remaining 88 gallons are used to do things like flushing toilets, washing clothes and dishes, bathing, and watering plants. This water, along with stormwater runoff, is the water that ends up in domestic sewage systems. And this is the water that is collected to be recycled back into the tap water many people drink.

How is it purified?

Needless to say, there is a lot that needs to be removed from domestic sewage water. Most recycled water follows a five-step purification process which starts by filtering out any solids and progressively removes smaller and smaller particles until the water is deemed safe to consume. There are many different filtration methods used including micro-filtration, reverse osmosis and UV light disinfection and advanced oxidation.

Why do we even need to consider using recycled water?

The idea of drinking water from a natural spring is obviously easier to stomach than the idea of drinking the water that just flushed down some gas station toilet. But not every region of the country is fortunate enough to have that choice.

The west coast of the United States has been struggling through a long-term drought that has seriously depleted the drinking water that is typically sourced from groundwater or the Colorado River. The drought is exacerbated by the fact that California has the largest population in the nation and it is home to many water-intensive plants, including almond trees.

The droughts have prompted fears that cities could run out of water entirely. Recycled water is a solution to those fears as reliance on groundwater and river water would diminish.

Does recycled water have the same quality as other tap water?

Several cities in the United States have started introducing recycled water into their tap water supply. San Diego, California, started developing its recycled water program in 2010. The city is in the process of building a full-scale facility that can produce 20 million gallons of purified water per day by 2025 and 83 million gallons per day by 2035. That means 40 percent of the city’s water will be recycled, drastically reducing its dependence on the Colorado River, where it currently sources 85 percent of its water. Many other cities are considering similar projects, including Jacksonville, Florida.