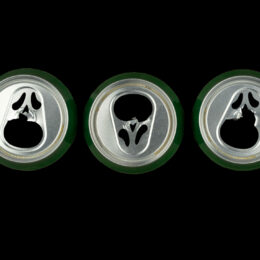 As Halloween approaches, Americans can expect to see a lot of people walking around in masks, pretending to be someone they aren’t.

It’s not all that different from the way many products claim to be “sustainable” when they’re actually not much better – or flat-out worse – for the planet. Here are a few “sustainable” products that deserve to be unmasked.

Plastic is often wrongfully demonized by environmentalists. But many alternatives to plastic are worse for the planet. Aluminum is one such product.

According to a study by McKinsey and Company, aluminum production generates twice as much greenhouse gas emissions as plastic bottle production. Aluminum is made from bauxite, an ore that is strip-mined in under-developed countries. Bauxite harvesting is a dirty process during which clouds of toxic red dust are spewed into the air, killing nearby vegetation and leaving residents with serious medical conditions. Aluminum production also emits PFCs (perfluorocarbon) which have a global warming potential upwards of 9,200 times that of carbon dioxide.

Environmentally conscious consumers have turned to solar panels as a preferred green energy option after years of incentives from federal and state governments. But solar panels can only function for so long. And when they stop working, disposal becomes a serious environmental mess. Solar panels consist of many heavy metals, including lead, selenium and cadmium. These metals can contaminate the groundwater, rendering it toxic for consumption. Local governments that encouraged solar panel usage decades ago are now scrambling to come up with a plan to keep solar panels out of landfills to avoid any risk to the water supply.

The toxic disposal issues combined with the fact that solar panels have an average efficiency of 15 to 18 percent – therefore leaving them to rely on the fossil fuels they’re meant to replace – show solar panels are nowhere near as sustainable as their supporters suggest they are.

Some communities have managed to successfully navigate banning plastic bags. Others have not.

New Jersey, for example, is scrambling to change its plastic bag ban just a few months after it was first implemented. After plastic bags were banned, consumers became inundated with “reusable” totes from stores and delivery services. Many of these reusable cotton totes have a carbon footprint thousands of times larger than typical plastic bags. The Ministry of Environment and Food of Denmark found that cotton bags need to be used 20,000 times to break even with the carbon footprint of plastic bags. Even worse, some New Jersey grocery stores have complained of consumers taking the thick plastic carriers meant for in-store use because they do not have plastic bags. In the end, New Jersey is dealing with a much larger – and more expensive – environmental disaster than it had before implementing its “sustainability” policy.

Adopting ESG (environment, social, governance) policies has been all the rage for corporate America in recent years. ESG metrics include some cultural metrics, such as levels of diversity within management, along with environmental issues, such as reliance on fossil fuels. But in practice, ESG ratings have become rather subjective and political in nature. Rather than objective metrics, companies can claim to adhere to strict ESG policies while having plenty of unsustainable practices.

For example, a company could have its headquarters with net-zero emissions, electric car incentives, and a zero waste policy – all of which land it a stellar ESG rating. But that same company may have factories in China operating under the least climate-friendly policies imagined. The ESG rating allows a company to appear sustainable without holding it accountable for its ties to China.

The term “organic” sounds like it must be environmentally friendly, but the opposite is true. While there are very few standards as to what can be called organic, most organic products are said to be grown without the use of pesticides or chemical fertilizers. But those products are key for efficiency.

Without fertilizers, significantly more land is needed to harvest as much food. And without pesticides, more plants die and rot into the soil. Rotting plants emit methane, a powerful greenhouse gas. According to a report from the MIT Technology Review, organic produce production generates 21 percent more greenhouse gas emissions than conventional produce production methods.

Many environmental activists, including Greta Thunberg, have advocated for adopting a vegan diet to minimize one’s carbon footprint. But in practice, vegan diets aren’t any better for the planet.

The production of meat and other animal products can occur almost anywhere as long as the barns are designed properly. But the same is not true of plant-based products which can only grow in certain areas throughout the year. In turn, they must be transported throughout the world. The transportation of fruits and vegetables contributes more than 1 billion tons of carbon dioxide, according to Nature. Many vegan alternative products have similar – or higher – carbon emissions than the real thing. For example, plant-based fake chicken nuggets have the same carbon footprint as real chicken nuggets. Other vegan alternatives carry lesser-known environmental harms. Increased demand for almond milk, for example, has been attributed to worsening drought conditions in California.