Vaccine-Preventable Illnesses Persist Around the Globe 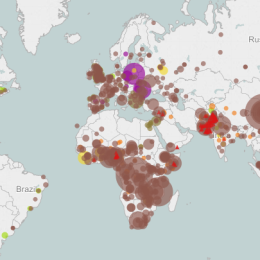 Today would be the 100th birthday of Dr. Jonas Salk, the scientist who developed the first successful, inactive-virus polio vaccine. Polio terrorized Americans in the first half of the 20th century, attacking the central nervous system and crippling or killing thousands each year. Since his invention and widespread vaccination, polio has been effectively eradicated in most of the world.

The polio vaccine, along with vaccines for measles, mumps, whooping cough, etc., have saved millions of lives around the globe. Yet the growing backlash against vaccines has resulted in an increase in outbreaks of vaccine-preventable illnesses. The Council on Foreign Relations has put together a map showing these outbreaks: http://www.cfr.org/interactives/GH_Vaccine_Map/index.html

Some of these outbreaks make sense—it’s long been a struggle to vaccinate children in sub-Saharan Africa due to shortages of vaccine supply and absence of strong health care networks. And in other areas of the world, including Pakistan and Somalia, the Taliban or other terrorist groups have attacked health care workers, making it difficult to administer vaccines. What’s most striking about this map is the prevalence of outbreaks in areas of the world with near-universal access to vaccinations, including the United States and Europe.

In particular, the outbreaks of whooping cough and measles in the U.S. are mind-boggling. Concerns linking vaccines to autism or other health problems have been widely discredited, yet the irrational fear of vaccination persists. We hope it doesn’t take an outbreak the size of the polio epidemic to finally convince parents that vaccinations are safe and necessary to ensure the health of their children and the rest of the population.