Home  ⁄  Periodic Fables  ⁄  Activist Groups  ⁄  When It Comes to Athletics, Chemistry is…

When It Comes to Athletics, Chemistry is the Real MVP 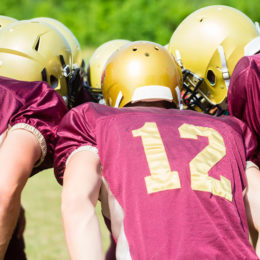 Friday night lights are soon to be ablaze as schools across the nation welcome the return of their students – and fall sports.

And although the jock-verses-nerd plot will surely continue to have a home in popular culture, our student athletes owe much of their safety to chemistry.

One design by a team of mechanical engineers at the University of Michigan uses an elastic-like plastic to absorb energy. In a cool feat of engineering, their helmet’s outer two layers work together to change the vibration caused by an impact so it’s better absorbed.

Other designs currently on the market use different layers of polystyrene foam on the inside of helmets help to absorb the blow. If “polystyrene” rings a bell, it’s likely because you see it regularly. It’s also used to make take-away containers, albeit that kind is much less dense (think: more squishy) than what you’d find in a football helmet.

The polycarbonate plastic which makes up the tough outside of a helmet is strong, shatter-resistant, plastic that is also used to make cell phones, CDs, and water bottles. Although we mostly hear about Bisphenol A, or BPA, in food and beverage containers, BPA is often what makes polycarbonates so tough. After all, it’s just as important for a football helmet not to crack on impact as it is to ensure food containers and processing equipment don’t shatter into your dinner.

As hundreds of studies indicate, it doesn’t matter if your quarterback eats his post-game snack out of plastic containers or rubs his helmet for good luck before every practice – the BPA in both is safe. Since humans excrete all the BPA they come into contact with in roughly 24 hours, real-life exposure never gets anywhere near the safety threshold set by the U.S. FDA (or any other nation’s safety agency, for that matter).

So when activists call for a blanket ban on BPA or polystyrene, their demands have a far greater consequence than just affecting what containers we put our leftovers in. That’s why it’s important to understand the risks both of using a chemical, and of not using it.

As far as keeping our student athletes safe, chemistry is the real MVP.