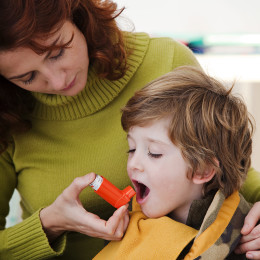 A new study published this week in JAMA Pediatrics reportedly links maternal exposure to Bisphenol-A (BPA)—a chemical found in canned foods, many plastics, and countless other applications—with higher rates of “wheeze” in children at ages 4 and 5. The study has been picked up by major outlets like CBS News and Reuters, but the coverage of the study made the link between BPA exposure and breathing problems seem a lot stronger than it really is.

The authors do note that the study has some limitations—most importantly that wheezing was based on parental reporting and could have easily been over or underreported. We’ve written before about the trouble of relying on self-reported data. Also BPA concentrations vary widely over time and were weakly correlated at 16 and 26 weeks. They also noted that “findings may reflect concurrent exposures to other chemicals or other unknown factors that were not accounted for in this analysis.”

It’s also important to know that other studies of BPA exposure and breathing problems have come to differing conclusions. A 2012 study published in Toxicological Sciences found that maternal exposure to BPA did not lead to significant differences in allergic asthma. Another study published in the Journal of Allergy and Clinical Immunology suggested that childhood exposure to BPA may be linked to asthma, but prenatal exposure had no effect—the opposite finding of this latest study.

What’s most notable about the coverage of this study by major news outlets is that there’s absolutely no discussion of the limitations of the study or other research that has found BPA exposure is not associated with human health risks. The CBS story even suggests that the study “raises concerns about the U.S. Food and Drug Administration’s decision not to limit BPA use in aluminum cans” without mentioning that two major FDA studies released earlier this year found that normal BPA exposure poses no health threats to humans.

Most Americans aren’t getting their health news from medical or scientific journals or FDA press releases. That’s why it’s so troubling when news outlets include health advice advising pregnant women to stay “away from canned products” and “using glass containers and avoiding plastic ones” without digging a little deeper and exploring whether that advice is truly warranted based on the best available evidence. News outlets have immense power to shape public opinion and have to do a better job of accurately reporting health stories.