Will Giving Up Meat Make You Lose Weight? 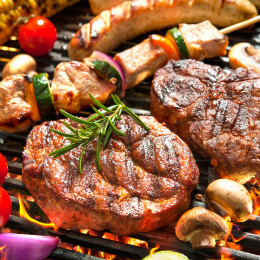 In a headline better suited for a late night infomercial, this week the Washington Post published an article, “How Americans Can Lose a Lot of Weight Without Giving Up a Single Calorie.” While certainly eye-catching, like many reports on scientific research, the article gives a misleading impression of provisional research findings.

According to the study, conducted by agricultural economists at the University of Nebraska-Lincoln, Americans could cut 2.57 points off their average Body Mass Index score by adopting a Greek (Mediterranean) diet; 2.13 points by eating like Finns (the Nordic diet); 1.96 by adopting a French diet and 1.48 by eating like the Japanese.

But before you toss out the meat from your refrigerator, what the study actually found was simply a correlation between plant-based diets and lower BMI (the crude, but often used measurement of obesity). Keep in mind that divorce rates in Maine correlate nearly perfectly with per capita consumption of margarine.

In fact, the research cited has still yet to go through essential steps that maintain academic accountability—namely being peer reviewed and published in an academic journal.

Here are some things the review board should consider:

So, just as you would be skeptical of diet plans advertised with too good to be true claims, news reports with similar claims should also furrow your brow. The reality is that diet is complicated, and anyone that uses one study to make simple conclusions shouldn’t be taken at face value.