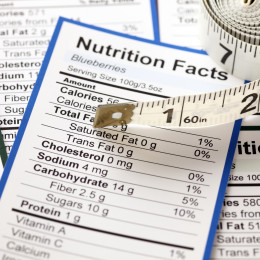 For the last 20 years, the U.S. Food and Drug Administration (FDA) has required food manufacturers to put Nutrition Facts labels on the back of packaged foods. We’ve all seen these labels—they tell you how many calories and grams of fat, carbs, protein, etc. are in each serving size—but under the FDA’s planned overhaul of the label, those serving sizes are about to get bigger.

The FDA says “People are generally eating more today than 20 years ago, so some of the current serving sizes, and the amount of calories and nutrients that go with them, are out of date. Therefore, FDA is updating the reference values used by manufacturers to set serving sizes to make them more realistic, reflecting what people really eat and drink.”

We shouldn’t be surprised the government’s attempt to help us eat better probably won’t work. The government’s role in nutrition standards has received criticism from scientists and nutrition researchers for years.

Many have pointed out the government’s recommended dietary intake of salt has little scientific basis. Recent research published in the journal OpenHeart determined that the government bureaucrats who made the decision in 1977 to publish dietary guidelines urging Americans to eat less fat had no data to support their theory reducing fat would lead to fewer cases of heart disease. It wasn’t until the proposed dietary guidelines this year that the government finally abandoned its anti-cholesterol and anti-fat recommendations.

Trying to decipher the scientific basis for many of the federal government’s nutrition policies is a surefire way to give yourself indigestion.