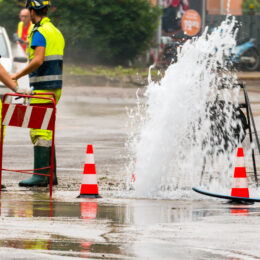 Millions of Americans were left without safe tap water because of an unexpected, record-breaking winter storm.

The winter storm brought ice, snow, and freezing temperatures across much of the United States with Texas, Mississippi, and Louisiana suffering some of the worst damage. In Texas alone, 15 million people were without safe water. Many more were left without electricity as heavy ice destroyed power lines and halted many wind turbines.

The freezing temperatures exposed the crumbling water infrastructure that has been in need of repair for decades. As temperatures dropped, many water mains froze and eventually burst. When the pipes burst, the water treatment systems lose pressure and the balance of chemicals is disturbed. Without consistent water pressure, pathogens can seep into the water and render it unsafe.

Depressurized pipes can be a breeding ground for biofilm, a pathogen-filled sludge that grows in tap water pipelines. Biofilm contains three of the most deadly waterborne pathogens in the U.S. According to the CDC, more than 7 million Americans suffer from waterborne illnesses each year. An estimated 6,630 Americans die each year.

With the tap water unsafe, many Americans were forced to wait in lines to collect bottled water. Jackson, Mississippi, is still without safe drinking water nearly one month after the storm hit. More than 90 water mains burst in Jackson, some of which hadn’t been replaced in more than 100 years.

Infrastructure is slated to be one of the next battles Congress picks up following the completion of the latest COVID-19 relief bill. President Joe Biden has noted that he believes a new infrastructure plan could be a good way to put some Americans back to work while addressing the serious flaws in the U.S. infrastructure.

The issue of water infrastructure, however, has not gotten top billing, despite the weeks-long suffering that millions of Americans just endured in Texas, Mississippi, and elsewhere. Other projects have gotten much more attention, including bridge repairs, expanding broadband access, and developing zero-emissions public transportation systems.

These projects are important, but access to clean, reliable drinking water is one of the most basic and essential needs of a community. If the tap water crisis is ignored in the U.S., more families can expect to wait in lines for water bottles, just as families had to do in Jackson.