YOU VOTE: Worst Celebrity Advice of 2014? 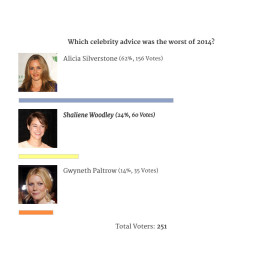 From social media sites to talk shows to reality TV, celebrities have a wide-reaching platform to message to the public and an eager audience to absorb their opinions and recommendations. While many celebrities have used their status to promote positive health campaigns, an unfortunate number of popular stars promote dangerous health misconceptions. We’ve highlighted the worst advice promoted by celebrities in 2014 and the possible health consequences of following their advice.

Paltrow is adherent to the idea of “detoxing”—severely restricting one’s diet and using saunas or spa treatments like colonics to “flush toxins.” And the diet is restrictive; according to her website, her January detox diet is:

Getting to the spa for a handful of treatments: Anything that gets the lymphatic system moving is clutch, and IR saunas are particularly great (and effective) as sweat is one of our body’s most effective means for flushing toxins….

‘Think about kicking the week off with a colonic – they definitely get things going.

There is no medical or scientific basis for this idea of “detoxing.” Our bodies are already excellent at removing toxins—it’s the function of our liver and kidneys. As Frank Sacks, MD, of the Harvard School of Public Health says, the idea that you need to help your body get rid of toxins has “no basis in human biology.” Expensive spa treatments or restrictive diets aren’t necessary and could pose serious health risks.

Colonics, in particular, are unnecessary and have side effects such as bloating, cramping, nausea, vomiting. They can also pose more serious risks such as bowel perforations, dehydration, and infection and are particularly dangerous for those who have trouble with electrolyte balance or connective tissues disorders.

You will probably lose weight on such a restrictive diet, but your body isn’t “detoxing.” It doesn’t store toxins from alcohol, food, or medicines—they’re regularly flushed out by our organs. Once you go back to your regular eating habits, you’ll likely gain the weight you lost back quickly.

Alicia Silverstone: Veganism Can Cure Disease, Tampons Make You Infertile, and Vaccines Can Be Dangerous

In her new book, The Kind Mama, the introduction claims:

Oh, and while we’re at it, we’re going to help prevent or even cure your PMS, irregular periods, high blood pressure, insomnia, allergies, breakouts, weight struggles, thyroid condition, lupus, and multiple sclerosis – while significantly lowering your risk of heart disease, diabetes and cancer.

According to the book, these can be cured through Silverstone’s proposed organic, vegan diet steering clear of “processed sugar, which makes us feel unbalanced.”

She makes other outlandish claims, including that tampons might cause infertility:

Unfortunately, feminine-care manufacturers aren’t required to tell you what’s in their products….which means that no one’s talking about the potential pesticide residues from non-organic cotton and the ‘fragrances’ containing hormone-upsetting, fertility-knocking phthalates.

Her book also veers into the anti-vaccine line of thinking, claiming:

While there has not been a conclusive study of the negative effects of such a rigorous one-size-fits-all, shoot-’em-up schedule, there is increasing anecdotal evidence from doctors who have gotten distressed phone calls from parents claiming their child was ‘never the same’ after receiving a vaccine. And I personally have friends whose babies were drastically affected in this way.

What the Experts Say:
While there are many reasons an individual might choose to adopt Silverstone’s proposed vegan diet, going vegan isn’t a miracle cure for disease and other health ailments.

For instance, author Jessica Girdwain points out in “The Vegan Myth,”

Because a vegan diet may lack appropriate amounts of good fat (like omega-3’s and vitamin B12), some vegans may suffer from elevated levels of the amino acid homocysteine (associated with blood vessel damage) and lower HDL (aka good) cholesterol. Both, notes one 2011 study, can actually increase the risk for heart problems and stroke.

There are also a number of studies, including from researchers with the Institute of Experimental and Clinical Medicine in Slovakia and two studies from University of Oxford in England that point out rates of cancer and heart disease aren’t that different between vegetarians and/or vegans and “health conscious” individuals who eat animal products. Going vegan isn’t necessary to improve health, but we should all strive for a healthy, balanced diet with essential nutrients.

The idea that fragrances or phlatates in tampons might cause infertility has no scientific basis. In fact, one study found tampons may protect against endometriosis, “a painful condition that afflicts about 10 million American women and can cause infertility.”

As far as vaccinations go, Silverstone’s anecdotal evidence about knowing a few people who say vaccines “changed” their children flies in the face of the overwhelming research showing vaccines’ safety. Just this month, a new 12-year study published in the journal Pediatrics examined two measles-containing vaccines and found they are overwhelmingly safe, with very low risk of side effects. Failure to vaccinate children has resulted in outbreaks of deadly, but preventable diseases such as measles and whooping cough in various parts of the United States.

In an interview with Into the Gloss, the actress said, “I’ve discovered that clay is great for you because your body doesn’t absorb it, and it apparently provides a negative charge, so it bonds to negative isotopes. And this is crazy: It also helps clean heavy metals out of your body.” She says it’s “one of the best things you can put into your body.” She’s repeated her quirky health tip to everyone from David Letterman to Flaunt Magazine.

What the Experts Say:

As we’ve established, your body doesn’t need any help detoxing or cleaning heavy metals out of your body. And there’s no evidence that clay is any help to your body’s detoxing system.

Dr. Aaron Carroll, professor pediatrics at the Indiana University School of Medicine, told TODAY, “This idea that there are negative charges and positive charges, and that’s all you need to do to get rid of your toxins—the average person is not so full of heavy metal toxins that they’re not getting rid of them naturally.”

Eating clay is common in some indigenous cultures. One study found that clay-eating among women in Bangladesh resulted in higher exposure to arsenic, cadmium, and lead—heavy metals that according to Woodley are being removed by clay eating.

Researchers from McMaster University and the Harvard School of Public Health examined the issue of celebrity medical advice and found that regardless of the scientific and medical basis for celebrities’ advice, the public gives such advice significant credibility and is eager to share such advice through social media, creating an “echo chamber.”

These stars have a massive following: Paltrow has over 2 million followers on Twitter, not to mention millions of website visitors and book sales; Silverstone’s books have been New York Times best-sellers; and Shaliene Woodley topped IMDb’s 2014 Top 10 Stars list. And their dubious health advice has been repeated by main stream media outlets, daytime TV doctor talk shows, and countless blogs and social media shares.

Instead of using their fame to promote wacky myths, these starlets could take a lesson from the likes of Hugh Jackman and Katie Couric who used their celebrity status to encourage cancer screenings. Unfortunately, the endless parade of celebrity-promoted cleanses, diets, and vaccination myths doesn’t appear to be ending anytime soon.