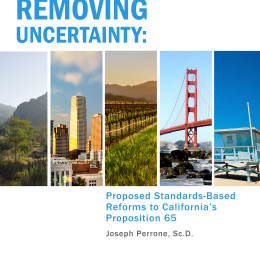 In November 1986, California voters passed a ballot initiative, “The Safe Drinking Water and Toxic Enforcement Act of 1986,” known colloquially as “Proposition 65.” In part, the initiative requires businesses operating in California to warn customers of possible exposure to chemicals known to the state of California to cause cancer or reproductive harm. To determine when a business must post a sign or label a product, the law requires California’s Office of Environmental Health Hazard Assessment (OEHHA) to maintain a list of chemicals that it finds cause either cancer or reproductive harm.

While the law was passed with the intention of improving public health, the regulations and litigation stemming from the law’s enactment have created a massive burden for businesses operating in California. Because the law was enacted through a voter-approved ballot measure, most substantive reforms to the law require a two-thirds majority of the legislature or voter approval. However, there are achievable regulatory and legislative changes that could alleviate some of the burden for businesses and improve the effectiveness of warnings for California citizens.

The greatest challenge for businesses trying to comply with Proposition 65 is the degree of uncertainty surrounding whether or not they are in compliance with the law. This paper outlines three major problems with the regulatory framework governing Proposition 65, particularly a lack of scientific basis for listing determinations, and offers recommended solutions. The main problems are the:

Since Proposition 65 allows private citizens to bring action against businesses they suspect of violating the law’s provisions, the law has generated substantial litigation. Citizen-initiated, so-called “bounty hunter” lawsuits cost businesses more than $17.4 million in 2013 alone, and nearly three-quarters of that total was paid to plaintiffs’ attorneys. This doesn’t even include legal fees, time lost, and cost of compliance by the businesses.