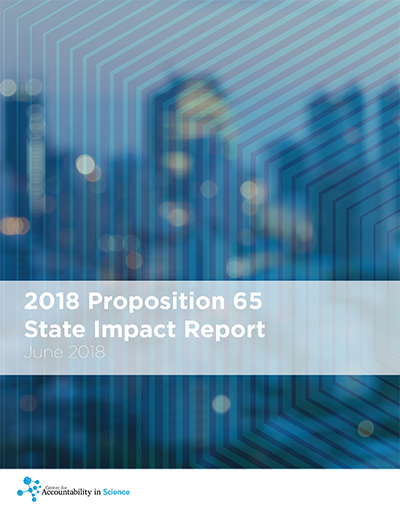 Proposition 65 is a California law that requires warnings on products and areas containing chemicals “known to the State of California” to cause cancer, birth defects, or reproductive harm. The law was supposed to keep people safe from toxic chemicals, but today it’s responsible for meaningless warnings on everyday items like coffee, flip-flops, and toothbrushes. The warnings are everywhere, and consumers have tuned them out.

Instead of protecting public health, Proposition 65 has evolved into a tool for trial lawyers to earn millions collecting settlements against small businesses whose products don’t actually put consumers in harm’s way – even if the businesses are located outside California.

Although California’s Attorneys General have prepared annual Proposition 65 settlement reports detailing the plaintiffs, defendants, and breakdown of settlement values since 2000, no one knew exactly how much money businesses in each state were paying to settle Proposition 65 lawsuits.

The Center for Accountability in Science’s first annual Proposition 65 State Impact Report is a first of its kind state-by-state overview of the negative financial toll California’s Proposition 65 (Prop 65) exacts on businesses nationwide. 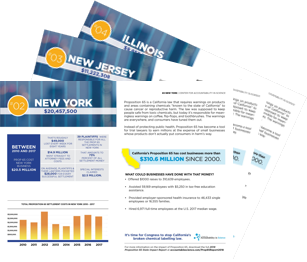 See where your state ranks

Between 2010 and 2017, businesses lost a total of $182.1 million settling Proposition 65 lawsuits — a figure that does not include the amount paid from cases that actually went to trial.

Roughly three out of every four of these businesses were headquartered outside California. Businesses from the most severely impacted states – New York (#2), New Jersey (#3), Illinois (#4), Florida (#5), and Texas (#6) — paid a combined $57.8 million in violation of the California law. New Jersey was home to the largest settlement paid by a single company, which reached more than $1.1 million. A total of 28 state economies — more than half the nation — lose an average of at least $100,000 every year settling Proposition 65 litigation.

So how did your state fare? The table in the next section. provides an estimate of how much money Proposition 65 settlements claimed from businesses in the top 30 most heavily impacted states between 2010 and 2017.

See Where Your State Ranks

Click each state to view details about Proposition 65 settlements affecting businesses headquartered there.

The Faces of Proposition 65

Proposition 65 is a California law that requires warnings on products and areas containing chemicals “known to the State of California” to cause cancer, birth defects, or reproductive harm. The law was supposed to keep people safe from toxic chemicals, but today it’s responsible for meaningless warnings on everyday items like coffee, flip-flops, and toothbrushes. The warnings are everywhere, and consumers have tuned them out.

Instead of protecting public health, Proposition 65 has evolved into a tool for trial lawyers to earn millions collecting settlements against small businesses whose products don’t actually put consumers in harm’s way.

How are out-of-state businesses sued under Proposition 65?

Under Proposition 65, any business with ten or more employees is subject to its labeling requirements if California consumers visit their place of business or buy their products — even if the product is purchased online or sold through another retailer.

Small businesses end up bearing the brunt of Proposition 65 settlement costs, since large retailers like Walmart or Home Depot often use indemnity agreements to shift their liability to a product’s supplier or manufacturer. If the retailer receives a 60-day notice, it’s the manufacturer – who may be headquartered out of state and who doesn’t directly sell to California consumers – who typically settles the lawsuit.

Come August 2018, updates to Proposition 65 expressly shift liability to the manufacturer, producer, packager, importer, supplier or distributor in most cases without retailers needing an indemnity agreement.

A lawsuit or settlement does not mean a business was poisoning the public.

“The prospect that warnings might be added to every cup of coffee seemed like a joke back in 1986, when opponents of the proposal touted its potential misuse…The fact that the most outlandish prediction may now come true only underscores the need for fixing or replacing this law.”

The Los Angeles Times Editorial Board

Chemicals can be added to the Proposition 65 list in several different ways, but two of the listing pathways involve cancer classifications from a problematic group called The International Agency for Research on Cancer (IARC).
Chemicals are automatically considered for Proposition 65 when IARC classifies them as carcinogenic to humans (Group 1), probably carcinogenic to humans (Group 2A), or possibly carcinogenic to humans (Group 2B). However, for IARC to classify a chemical in Group 2B, evidence that the chemical can cause cancer in humans does not need to exist. Experimental animal data is sufficient, even if chemical exposure occurred in doses far higher than any person would reasonably encounter. As a result, chemicals can be added to the list even if no human evidence suggests that real-world exposure increases one’s risk of cancer.

Companies can be sued even when their products meet federal safety guidelines and won’t harm consumers.

How conservative are Proposition 65 limits?

EPA safety estimate:
Less than 44 mg per day for the average man

Proposition 65’s safety threshold is 220000x smaller than what the EPA thinks could actually cause cancer.

Only about 300 chemicals on the Proposition 65 list are assigned a “safe harbor level.” Exposure to a chemical in amounts smaller than this level isn’t expected to harm humans, so products containing a Proposition 65 chemical in levels below this safety threshold don’t need a warning.

Safe harbor levels are very conservative estimates for safety. For reproductive toxins, Proposition 65 requires this level to be set 1,000 times lower than the chemical’s “no observable effect level,” or the amount shown not to harm humans or laboratory animals. Even if a chemical exceeds the safe harbor threshold, it may be present at levels that won’t cause birth defects or other reproductive harm. For chemicals listed as cancer causing, the “no significant risk level” is low enough that exposure would cause no more than one case of cancer per 100,000 individuals over a 70-year lifetime.

For the more than 500 chemicals without a safety threshold, companies can be sued if their product contains any amount of the chemical – even if that amount meets the chemical’s established federal safety guidelines and would never be harmful to consumers.

As the recent high-profile case between Starbucks and ninety other coffee manufacturers shows, even with no evidence that a product (coffee, in this case) causes cancer, companies still risk losing their case if they choose to fight Proposition 65 in court.