Hats Off to Chemistry This Fourth of July 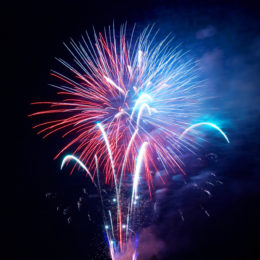 Tomorrow, millions of Americans will stand in awe of the grand displays of chemistry—that is, fireworks—bursting over their hometown on the Fourth of July. It’s easy to appreciate science in that moment, when explosives are launched to just the right height to ensure safety and explode in an array of color.

But it’s important to remember that even when it’s not immediately apparent, science is all around us. In fact, science makes our Independence Day celebrations possible!

Strontium salts create red fireworks. But if you can’t catch your local light show in person (and if you still have a glass screen television), strontium also protects you from errant radiation caused by the reaction in your screen’s cathode ray tubes.

And before making fireworks that burst a bright white color, titanium dioxide played a role keeping your family safe from sunburn. The compound is a natural UV blocker found in most sunscreens.

Although copper salts are responsible for blue fireworks, copper is probably most notable for making the Statue of Liberty her beautiful shade of bluish green. For more than 12 million American immigrants who entered through Ellis Island, the copper-coated statue marked the beginning of a new life in the United States.

Even fireworks need a pick-me-up now and then, which is where chlorine chemistry enters the picture. In addition to keeping your backyard pool bacteria-free, chlorine compounds are responsible for strengthening a firework’s color, and in some cases provide oxygen for the firework’s combustion.

As we enjoy our Independence Day swimming in clean water, avoiding sunburns and watching chemical reactions light up the night sky, let’s take a moment to tip our Uncle Sam top hats to science.