Home  ⁄  Periodic Fables  ⁄  Uncategorized  ⁄  No, You Won’t Meal Prep Your Way to Obesity

No, You Won’t Meal Prep Your Way to Obesity 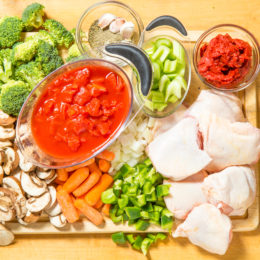 “Meal prepping,” or preparing a week’s worth of food in advance to focus on portion control and nutritional content, has taken the health world by storm. With studies consistently indicating that people who prepare their own food eat more fruits and vegetables, adhere more closely to nutritional guidelines, and exhibit better portion control, meal prepping is certainly worthy of more attention than celebrity-touted fad diets.

But recent headlines claim “Meal Prepping May Actually Be Sabotaging Your Diet” due to the presence of a chemical called bisphenol A, or BPA, in plastic food containers.

BPA makes plastics clear, flexible, and shatter-resistant. But in the wake of misleading headlines claiming BPA is the root of the obesity epidemic, some fear eating foods stored in BPA-containing plastics will make them fat.

BPA is a weak mimic of the hormone estrogen, and some studies have found that rodents fed massive quantities of BPA may have heavier offspring. By and large, these studies have been dismissed by the scientific community due to their poor design.

Often these studies rely on just a small number of test subjects, making it harder to tell if weak associations between BPA and health effects are happening by chance, or if BPA is driving the change. Many also expose research animals to BPA via injection, which the National Toxicology Program advises against, since bodies processes BPA differently through digestion. And often, research animals are exposed to BPA in doses thousands of times higher than the equivalent of what humans are actually exposed to.

Prof. Richard Sharpe, Group Leader of the Male Reproductive Health Research Team at the University of Edinburgh, notes that “even at levels of exposure 4000-fold higher than the maximum exposure of humans in the general population [BPA causes] no discernible adverse effects.”

That’s pretty conclusive, although “BPA doesn’t do much of anything in humans” isn’t quite as flashy as “Plastics make you fat!”

So when the next headline asks “Is Meal Prepping Negating Your Weight Loss Efforts?” you can answer with a resounding absolutely not.