A Case for Cupping? 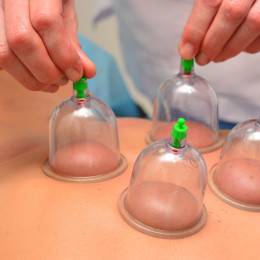 If you’ve been watching the Rio Olympics, you may be concerned about the large, dark spots on some athletes. “Cupping,” the practice responsible for the marks, is having its moment in the limelight. But what exactly is it?

The “muscle-healing therapy” has been used in alternative medicine for at least the last several hundred years. It involves creating vacuum pressure inside a cup, which is then applied to the body to create a light suction.

In an interesting application of physics, igniting flammable liquid inside the cup heats its confined air particles (aka increases their energy), making them move further apart from one another due. For an appropriate visual, picture a room full of sitting kindergartners versus a room of kindergartners after eating a pound of sugar. Once the air cools, it contracts, leaving room for more air particles to take the available space. For the less pyromaniacal among us, this effect can also be attained by manually pumping air out of the cup.

As a result, the skin and outermost muscle is gently sucked into the cup. Blood is drawn to the skin’s surface, which rush ruptures capillaries – tiny blood vessels – in the skin. The British Cupping Society states that this mobilization of blood flow promotes natural healing.

But does the therapy really work? Although practiced in China for centuries, there has been no demonstrable effect that cupping itself relieves muscle pain. Even the British Cupping Society’s “Latest Researches” section is woefully blank.

Cupping does, however, create a placebo effect – and a powerful one at that.

Imagine you’re an Olympic-level athlete, exhausted and sore after an eight-hour training session. If your physical trainer tells you to lie down and let the cups work their magic, you’ll believe it. You envision blood coursing through your sore muscles, washing away the lactic acid and damages of a hard workout. And you feel better. Cupping, like a lucky pair of socks or pre-game ritual, makes athletes believe they have an edge.

But using cupping as a general therapy to ease your daily aches and pains? On the basis of good science, we’ll pass.