Kick Off Soccer Season with Sunscreen 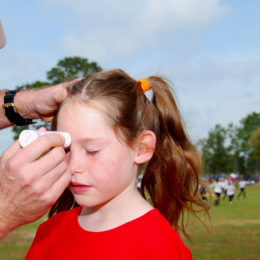 August is in full swing, which means soccer season is just around the corner. Although buying cleats and shin guards is a no-brainer, parents should arm their athletes with another line of defense: sunscreen.

It can be easy to forget to lather up as temperatures start to cool. But the American Academy of Dermatology estimates that even one bad childhood sunburn can increase a person’s risk of melanoma by as much as 50 percent later in life. For fair-skinned Americans, that equates to a roughly 3.75 lifetime risk of a melanoma diagnosis. As you can guess, the American Cancer Society cites protecting your skin from UV rays as the most important way to lower your risk of melanoma.

Unfortunately, some in the “all natural” movement have taken to advocating against common sunscreens because they rely on chemicals to block UV radiation.

(Clearly, someone missed their science teacher’s lecture that chemicals make up every part of our world.)

In its annual summer sunscreen guide, EWG attacks oxybenzone, one of our most effective broad-spectrum (UVA and UVB) protectants, and Vitamin A, an antioxidant that prevents the sun’s aging effects, for being harmful to rats in strong doses. But as dermatologist Dr. Jackie Dosal explains, it would take 200 years of regularly applying either ingredient before either would cause a health effect in people. Conversely, skin damage can begin after just 15 minutes in the sun.

Fear over sunscreen “nanoparticles” is also far-fetched. The tiny particles clump together, preventing your body from absorbing them. And when natural mineral ingredients like zinc oxide or titanium dioxide are small enough, they don’t leave an annoying white residue – making it less likely that the kids will put up a fight about wearing sunscreen. You can learn more about titanium dioxide specifically by watching our recent video, Is Titanium Dioxide Harmful to Your Health?

In reality, the Food and Drug Administration (FDA) regulates sunscreens as over-the-counter medications, and their ingredients face similar scrutiny.

Parents should be confident knowing water-resistant sunscreen of at least 30 SPF will keep their athletes sunburn free for the season.