The Anti-vaccine Crusade is a Disgrace to Science 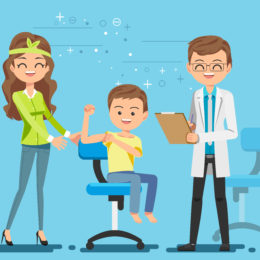 For better or worse, Washington D.C. has earned its reputation as a hub of activism.

A crowd of anti-vaccine activists lobbied 80 congressional offices on Thursday, and will round out this Friday with demonstrations near the White House. Notorious vaccine critic Robert F. Kennedy Jr. is poised to deliver the event’s keynote speech, lending legitimacy to the nation’s most dangerous vein of pseudoscientific ideology.

We’ve blogged ad nauseum about the dangers of an unvaccinated society, and why fears over a “link with autism” are absolutely, unquestioningly unfounded.

Not that long ago, Americans lived in fear of infectious diseases such as polio. In the early 1950s, polio caused more than 15,000 cases of paralysis each year. Following the introduction of vaccines in 1955 and 1963, the number of polio cases fell rapidly to less than 100 in the 1960s and fewer than 10 in the 1970s. Since 1979, no cases of polio have originated in the United States.

Your uncle, President John F. Kennedy, joined with then-Surgeon General Dr. Luther Terry, in “urging that every person who has not been vaccinated immediately do so with the vaccine now available.”

You could build on your family’s legacy of science-based, public health prevention. Instead, you are sowing fear and doubt at the highest levels of government by doubling down on your conspiracy theory that the use of thimerosal in vaccines causes brain disorders, including autism.

To be clear, vaccines and autism are not linked or related in any way. That has been confirmed many times over by top scientists and physicians. The American Academy of Pediatrics, the Institute of Medicine, the Centers for Disease Control and Prevention, and other reputable, trustworthy organizations have concluded that there is no evidence supporting a link between thimerosal and any brain disorders, including autism.

Truly legitimate risk factors linked to autism do deserve our attention. A report in the December 2016 Annual Review of Public Health identified several environmental factors that work together, or that interact with genes, which can elevate a child’s risk of developing autism between two and four times. Such risk factors include older age of the father or mother; high levels of air pollution during pregnancy; and severe reactions to bacterial and viral infections during pregnancy, some of which can be prevented through vaccination.

But wait, there’s more. Be sure to read Susan Peschin’s entire letter on the STATnews website.

And for good measure, check out the global histories of polio, measles, and smallpox. We could warn you that some of the links contain graphic images, but if anti-vaccine pseudoscience gains a foothold in Congress or the White House, you might as well get used to the gruesome reality of vaccine-preventable disease.