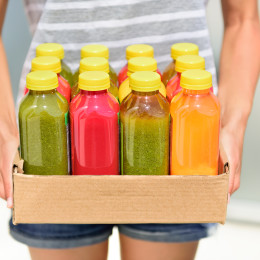 A round of applause for Forbes for squeezing out the truth about juicing. When asked whether it’s a good or bad idea to lose weight drinking juice, Paul Crane put the juicing craze to bed.

There is a popular (and alas, incorrect) notion that we must take an active role in “detoxing” the chemicals from our body. Pharmacist Scott Gavura aptly calls it “a legitimate medical term being turned into a marketing strategy.” To detox in a medical sense is to reduce clinically dangerous level of drugs, poison, or alcohol in the body. According to the U.S. Department of Health and Human Services, medical detoxification occurs in three steps:

That’s a far cry from the metabolic “damage” your yogi may claim your body suffers as a result of eating processed foods.

“But what’s the danger in drinking a couple glasses of juice?” you may ask. Well, nothing – as long as your juicing is incorporated into a balanced diet. Although fruit (and by extension their juices) contain vitamins and minerals essential to maintaining human health, you can’t sustain yourself on juice alone.

The average daily cleanse offered by Project Juice, for instance, clocks in at only 688 calories per day. That’s about half of the minimum calorie recommendation for women, and a third of the recommendation for men, according to The American College of Sports Medicine.

To put it in perspective: If you’re a man, you can eat a serving of fish, lean beef, two cups of broccoli, and a pound of quinoa and vegetable salad on top of your juice cleanse and still be short of the daily calorie recommendation.

Extreme calorie restriction sends your body into crisis mode, signaling it to store, not lose, fat. Sustained restrictions not only trigger an adverse metabolic response, but also impede learning and recall ability.

But here’s a curve ball for you, because nothing is ever clear-cut in the world of science: moderate calorie restriction has long been linked to longevity in rats.

So what gives? If restricted diets cause the body to signal a crisis, how could it also promote a long life? The secret is that single adjective: moderation. The Okinawan cultural practice Hara hatchi bu teaches that one should avoid eating to the point that they’re completely full. And the Okinawans may be on to something. Rather than embarking on juice-based crash diets which don’t offer long-term sustainability, dieters should look to well-balanced meals to lose the weight, and perhaps stop eating several mouthfuls short of being full.