Myth: America Is Responsible for the Bulk of the Trash in the Ocean 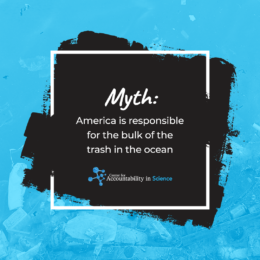 Most of the trash can be traced back to Asian countries. More than 90 percent of ocean trash is tied to just 10 rivers in Africa and Asia. A lack of trash infrastructure is a main reason why countries in this region of the world tend to have more mismanaged trash, but there is also blatant dumping of trash into the ocean. One study found that 73 percent of the trash in the Atlantic was dumped there by Chinese cargo ships.

While the mismanaged trash may start in Asia and Africa, it does not stay there. Gyres, which are massive current systems that circle throughout the ocean, pull trash to far away places. A study from Hawaiian Pacific University found that trash has traveled as far as 3,000 miles from Asia to Hawaii. Other countries’ trash can litter beaches here and around the world.

This post is the first post in a new weekly series on environmental myths. You can find more posts on this topic here.