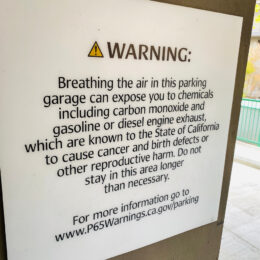 Since its founding, Amazon has been able to skirt the onerous law known as California Proposition 65. But those days may soon be over.

Prop 65, officially titled the Safe Drinking Water and Toxic Enforcement Act of 1986, was a California ballot initiative that garnered immense support. The policy was originally aimed at keeping drinking water clean. But it has since spiraled into an out-of-control regulatory scheme in which companies are required to put a warning label on any product that may contain one of over 900 substances deemed toxic by the state of California.

The infamous problem with the law is that the bar is low for what is deemed “toxic,” and the law provides for enforcement by lawyers. An entire cottage industry in bounty-hunting Prop 65 lawyers has emerged, threatening to sue companies left and right over missing labels on backpacks or cookies.

The result is that just about everything now has lengthy Proposition 65 warnings in California – and for any product that wants to be sold in California. Even aloe vera.

And the financial hit for missing a label can reach into the five figures. Several small businesses suffered massive pain under Proposition 65. (You can see some of their stories here.)

Of course, lawyers are always looking for bigger pockets.

Corporate giant Amazon has been able to skirt Proposition 65 liability because the company has argued that it is simply a platform, not a manufacturer. Essentially, Amazon is claiming that it is nothing more than a virtual shelf in a shop from which consumers buy products. The manufacturers should be responsible for warning labels, not Amazon.

Amazon was floating along just fine until a lawsuit was filed in Alameda County which claimed that Amazon should have been required to post a Proposition 65 warning on a skin-lightening cream that contained potentially harmful substances. Amazon won its initial court case on the issue, but the First District Court of Appeals in San Francisco overturned that ruling earlier this month.

The First District Court argued that Amazon was more than just a platform. Justice J. Anthony Klein stated that Amazon takes an active role in ensuring that products “reach a vast audience of potential customers.” Amazon also charges a fee to sell the product, packages it, and ships it to the consumer.

Klein stated that a small drug store owner would be required to include the warning so Amazon should be held to the same standard if it wants to do business in California.

For now, the lawsuit has been allowed to move forward but it is likely that Amazon will further appeal the Proposition 65 decision. If Amazon loses, it will join the long line of companies that have suffered under California’s burdensome law.