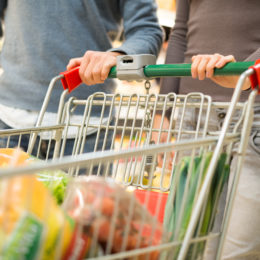 The study compared consumer’s use of nutrition information with the healthfulness of both their groceries and meals purchased outside the home. Here’s what they found:

Americans Eat Healthier Than The Survey Makes Them Out To — Barely.
Studies have shown that Americans living above the poverty line generally make better nutrition choices than those below. However, the USDA survey includes almost twice as many responses from low-income Americans as it does from those living above the poverty line, even though that ratio doesn’t reflect reality.  Those above the poverty line score about 2 percent better than the “average” reported in every category, whether they’re low, medium, or high information users. Based on the USDA’s 2010 Healthy Eating Index, that amounts to eating an additional half cup of vegetables or consuming 50 fewer empty calories every day. So take the following averages with a grain of salt (but not more than 2,300mg a day!)

Most Americans are “Medium” information users.
48 percent of those surveyed are somewhat familiar with federal nutrition guidelines like MyPlate or the old Food Pyramid, try to follow nutrition recommendations, use the nutrition labels or menu labels to compare products, recently looked up healthy recipes online, or attended a nutrition-focused cooking class. 13 percent of participants heavily rely on this information, while a concerning 39 percent are not.

High Information Users Don’t Make Drastically Different Choices.
Americans who report using the widest variety of resources to inform their diet choices only scored 3.6 percent higher on the Healthy Eating Index, on average. On a 100-point scale, the most health-informed Americans scored a 56 on average – that’s still an F. Yet across the board, Americans think their family’s diet is pretty healthy.

Americans Make Healthier Choices at Home.
There’s a gap in good nutrition choices at home and at restraints, but it’s not because restaurants are unhealthy. Food purchased and eaten away from home scores an average 43 points on the Healthy Eating Index, and that number is pretty uniform no matter how much nutrition information people report using. However, as nutrition information use increases, people make healthier choices when buying groceries. Consumers know how to make healthy choices – but when deciding between a salad or a pizza, health loses to taste. A whopping 75 percent of Americans in the survey reported that healthy food “just doesn’t taste good.”