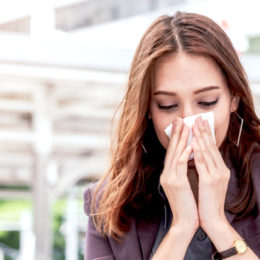 At least 30 children have died from the flu this year. And while the exact count of adults won’t be known for some time, dozens of deaths in North Carolina are being attributed to this year’s outbreak, according to a new piece by the director of the Center for Disease Control (CDC), Dr. Brenda Fitzgerald.  According to Dr.  Darria Long Gillespie, “Studies suggest that among people who die from the flu, anywhere from 75 to 95 percent of them were not vaccinated. The flu vaccine is a crucial tool in protecting all of us from the flu and its complications.” This is another blow to the anti-vaccine crowd, who criticize vaccines and blame them for everything from cancer to autism–even though there is little to no evidence to support their claims.

The flu this year is having an unusual effect on baby boomers. Those aged 50-64 are experiencing the second-highest incidence of hospitalization from the flu at a rate triple that of last years. According to the head of the CDC’s influenza division, Dr. Daniel Jernigan, “These are folks who would really benefit from higher vaccination rates… They’re usually at the peak of their careers, or managing a lot of business, and them missing work because of flu would have a huge impact.”

To be fair, vaccines aren’t the end-all-be-all of disease prevention. Dr. Fitzgerald lays out some great advice for surviving the flu season. Beyond obvious things like not touching your eyes, nose, or mouth and keeping your hands clean, she also suggests limiting contact with those who are sick, even if they’re in your own household. For example, designating one person as the primary caregiver minimizes the spread within a household. As for going to work? Don’t. While you might be able to fight off the flu, many of your co-workers might not be able to.

But as a large part of her argument, Dr. Fitzgerald also suggests getting the flu shot, regardless of your age and medical condition. Several of the deaths this year have occurred in otherwise healthy individuals because of the strains that are going around. While many have an aversion to the vaccine, there is increased protection even to this severe strain.

And as always, if you get the flu, at least call your doctor. Only they can explain how to best handle the situation given your medical history.