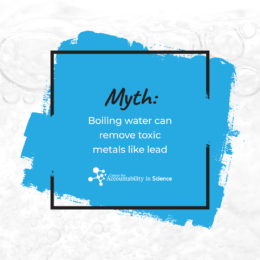 Almost every day, some Americans are notified that their home has been placed under a boil water advisory because their drinking water has been contaminated. This leads many to believe that boiling water is a catch-all solution to any water contamination. While boiling water can get rid of some of the harmful contaminants found in tap water, such as E. coli bacteria, it cannot get rid of metals like lead. In fact, it can make them more harmful.

When metals like lead or benzene are boiled, they can become airborne meaning that they can harm anyone in the vicinity of the boiling pot. It will not reduce the metals at all. Both benzene and lead have been tied to dangerous disorders including cancer and developmental disabilities.

Families must be sure to review the exact guidance issued by their municipalities if they are notified that their water has been contaminated. FEMA recommends families store one gallon of bottled water per person, per day, to keep their families clean and hydrated during emergencies.